Jessica's first session was spent persuading her that she should come through the school gates since she didn't want to be caught. Some of this is no doubt due to the strange and exciting environment but it can't all be attributed to that since she has been doing the same at home when her owner has been trying to catch her over the last week or so.  When I was pootling around the field earlier, she came trotting up to me twice for a love and a rub and it was only when I reappeared with the head-collar that she decided she wanted to play truant. It's easy to think of this as some sort of game but I think it is actually an indication of their state of mind, an ambivalence about the head-collar and rope, or of being with people. 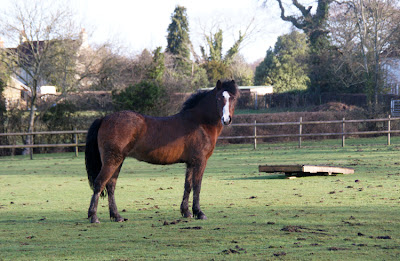 Having enticed her into the round pen with some hay and feed, I used advance and retreat, coupled with clicker, to persuade her to be caught and spent the rest of the session just practising that. I think it was Mark Rashid that said you need to deal with what you have got on the day and that's exactly what we did.
Posted by Loisaba Wildlife Conservancy at 11:04 PM