Theoden has already made vast progress three days into our training. Today he stood quietly in the yard, waited untied while I fetched things out of the shed, and walked away from the yard completely calmly when we turned our back on the things that have previously caused him to rush.

We went straight out into the little paddock where he stood solidly for me to mount and waited well over a minute before I asked him to move off.

We completed tasks that he has been able to do before so that I wasn't using clicker to teach him anything new. The difference was that his attention was completely with me (rather than in the other field with Petra) and he was trying to work out what I wanted him to do rather than resenting even the slightest pressure. He only flicked his tail at the flies. 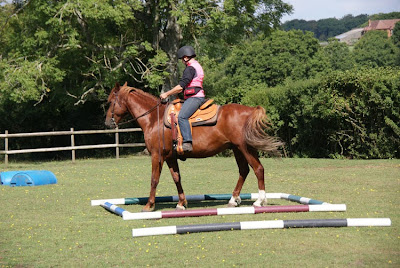 One side effect of clicker training from the saddle is that horses becomes very sensitive to sounds that might indicate that there is a treat coming. This can result in the head being raised quite high. This doesn't look too bad to me. 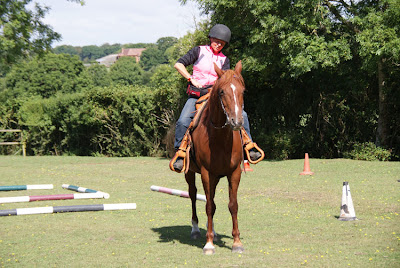 The other worry is that the horse might come to sudden halt when he hears a click. I was keen to see what would happen if I used a single click to say "Keep on doing what you're doing" (with no treat) and three clicks to mean "You've done it, stop, well done" (followed by a treat). I wanted to avoid the hand going to the bag as being the terminal signal because it is too easy to brush against your own clothing or to open a zipped pocket and the horse come to a juddering halt. I thought that Theoden would join the Union and demand his treat for every click but instead there was a remarkable outcome. With only a momentary hesitation he would then take the next step requested and seemed to get real confidence from it that he was doing the right thing. I did feel a bit like an African Bushman with my kiss and click noises but Theoden definitely got it. Just look at this happy trot. 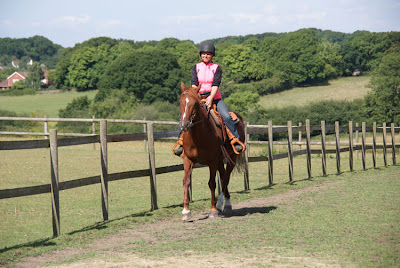 Next it was time to take the youngsters out long reining together. It's an important part of their training to go to the pub, hang around in the corrals while we have our lunch and then come home again! Isaac and Jazz took it in turns to take the lead. They are also carrying a bit very calmly and quietly too. 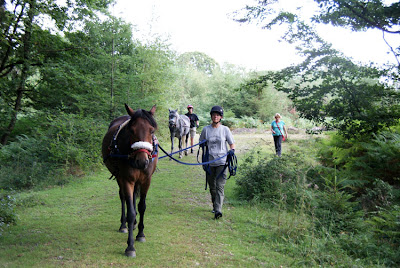 Then it was time to go off to the Fire Station for the Animal Rescue Team Open Day. Once again the plastic mannequin had found itself stuck in a ditch.