Heading back across the Forest having been rained off for the day I spotted Nelly and Blue standing behind a bush. They must have been doing that a lot recently since they have both managed to avoid the drifts. It's been almost a month since I saw Nelly and subconsciously I had been worrying about her but as you can see, she is as bonny as ever. And Blue is doing her Pilates. 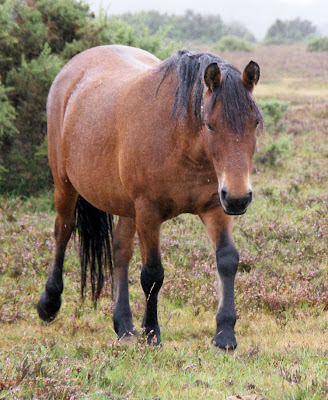 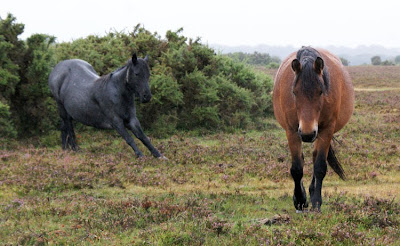 I don't know whether a pony out on the Forest has ever got laminitis (and no, that doesn't account for Blue's momentary stance) but I do wonder how much of that is due to the fact that their weight is allowed to fluctuate with the seasons. My Forest ponies get supplemental hay for a couple or three months after Christmas but other than that I do allow them, and the horses I have in, to slim down during the winter. Perhaps it is the fact that we tend to want out horses to look the same throughout the year and therefore overfeed and over heat, that means that they get metabolic problems. On a recent programme about obesity and Type 2 Diabetes in humans, I heard one commentator declare that the problem was that it was always summer all year round in so-called developed countries.  Research project anyone?
Posted by Loisaba Wildlife Conservancy at 5:11 PM