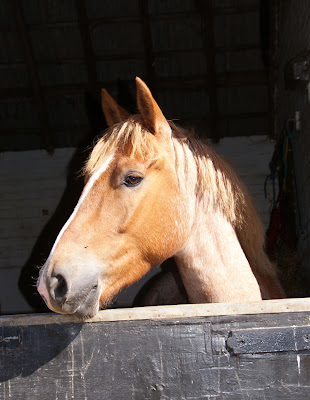 Any training whether of people or animals needs to be incremental and broken down into stages if it is to be absorbed, consolidated and then improved upon. It bears repeating that anything that you would like to be able to do fairly quickly needs to be done very slowly in the first place. This is particularly so if speed has been used in the past to simply get a job done or the horse has experienced pain or discomfort. Benji has had aural plaques and may have had his ear twisted (ear twitched) when he was semi-feral.

The training world could learn an awful lot from the detailed shaping plans that are used by clicker trainers to devise the most step by step approach that can be taken to a set task. The discipline of committing something to writing and thinking about all the what ifs helps to highlight just how many stages are involved in one task. Try doing the same to describe how to make a cup of tea! Imagine assumptions we make when we give the instruction "Put the kettle on" - it might not suit them!

Hilary has worked quietly and calmly on handling Benji's ears and as a result he is now happy to have them handled providing it is done with sympathy and thought. No tickly, grippy fingers which would only serve to reinforce all of his fears. Instead a deep flat and still touch. However, the instant he saw the crown piece of the bridle, all of Benji's old concerns resurfaced. We dropped back down the shaping plan and taught him to take the bit into his own mouth - he literally picked this up very quickly because he is not afraid of the bit itself. Then it was a case of repeating the work, simply touching his ears in the same way as before but with the crown-piece clearly visible and in fairly close proximity to his ears. We used one click to mean "Keep on doing what you are doing", in other words, please keep still with my hand on your ear. Then we used three clicks and a treat to mean "Well done, you're brilliant." After quite a bit of repetition we were able to put the crown piece over his left ear without any fuss.

This still leaves Hilary with a lot more homework as she will need to repeat the whole thing with his right ear. However, while she is doing that she needs to avoid reinforcing the wrong thing and undermining her own shaping plan. Accordingly we attached clips to his cheek pieces so that the bit could simply be dropped out of his mouth after each repetition rather than trying to take it off over his ears. Hilary has also got a show bridle which comes apart in sections so that she can carry on with her plans t show him without having to rush his training. She'll get there - she always does. 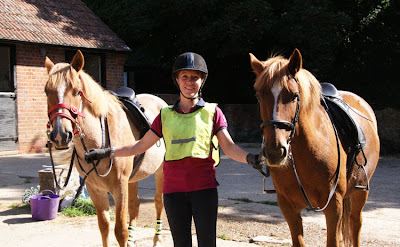 So important too to keep clicker training sessions short and sweet so for a complete change of subject we took Benji out on his first accompanied hack on the road. I rode Ginger. Ginger is an ex-riding school pony and not really happy to take the lead. Benji on the other hand had no such reservations and happily strode out taking in all the sights and sounds of a quiet village lane.