Next we popped mext door to Sabuk Lodge where we were going out for a three day camel safari. Here we could watch the elephant on the adjacent hill whilst sitting in the outdoor bath! The following day it was time to meet the camels.... 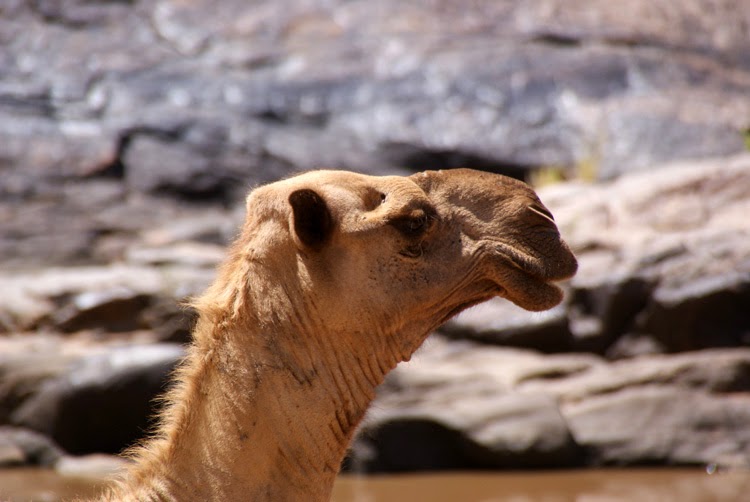 My camel, Boy,  groaned a lot and huffed his cheeks when I got on board. Riding him, seated precariously on his single hump wasn't the most comfortable riding experience. I was hopeful of working out what made him tick, His long legs and soft feet ate up the ground but he struggled with inclines and uneven terrain. All the time he gazed around serenely following in the footsteps of the Samburu guide on the lightest lead. He only complained when asked to sit down or stand up when I needed to rest my weary mtako or my weary legs.  Otherwise it was hard to read his expression as his ears are always set back and his lower teeth often stick out. 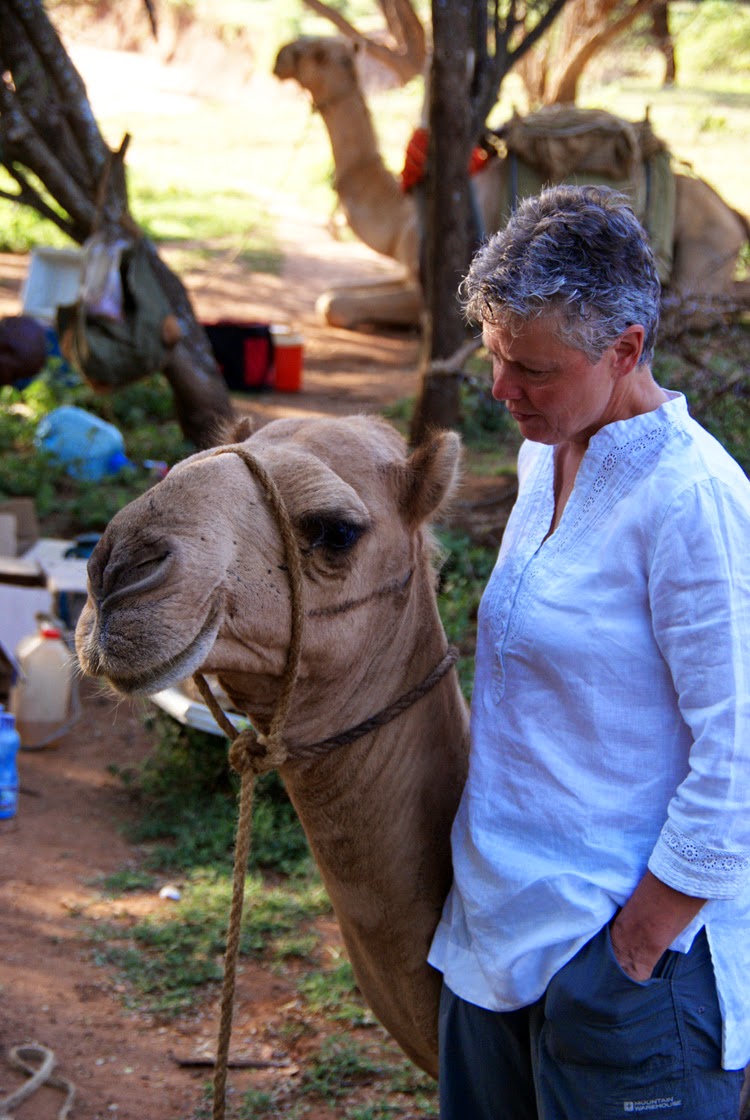 After four hours travelling, we set up camp at a dry river bed and the camels were turned out in the bush to graze on the trees and to roll in the sand. Early the following morning I took the time to touch my camel, temporarily re-named George, to see what he liked and he didn't like compared to the horses. Just like them he seemed to prefer a deep, flat, slow touch and to have the muscles of his long neck massaged. He liked the bones on his face traced and the base of his ears rotated gently. He turned his head to look at me and I suddenly felt a real connection and that just like the horses he was simply a bag of emotions. He was only concerned with whether I was friend or foe. Verity, who is in charge of Sabuk, had reassured me that none of the camels are hit and certainly the guides were very kind to them, nevertheless George bears historical scars of rope burns on his face and has been hot branded. 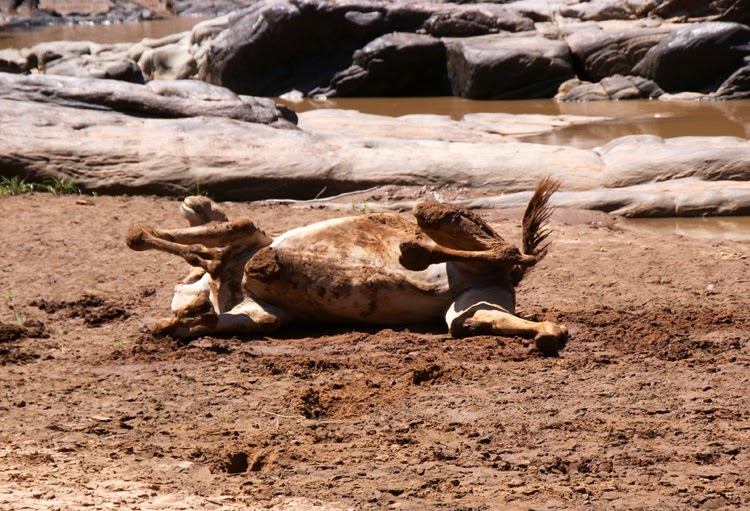 This encounter with George was special enough but was followed later by one of the most fulfilling experiences. At the next camp on the 'beach' of a fast moving river, the camels were once again set free for the afternoon. Each one came down to the sand to roll and to take a drink before heading up the hill to graze, George followed suit but took a detour over to where I was sitting, peering candidly at me through the leaves of the overhanging tree, positively asking me to touch him again. Of course I obliged. Later I found him and removed three acacia thorns from his face. 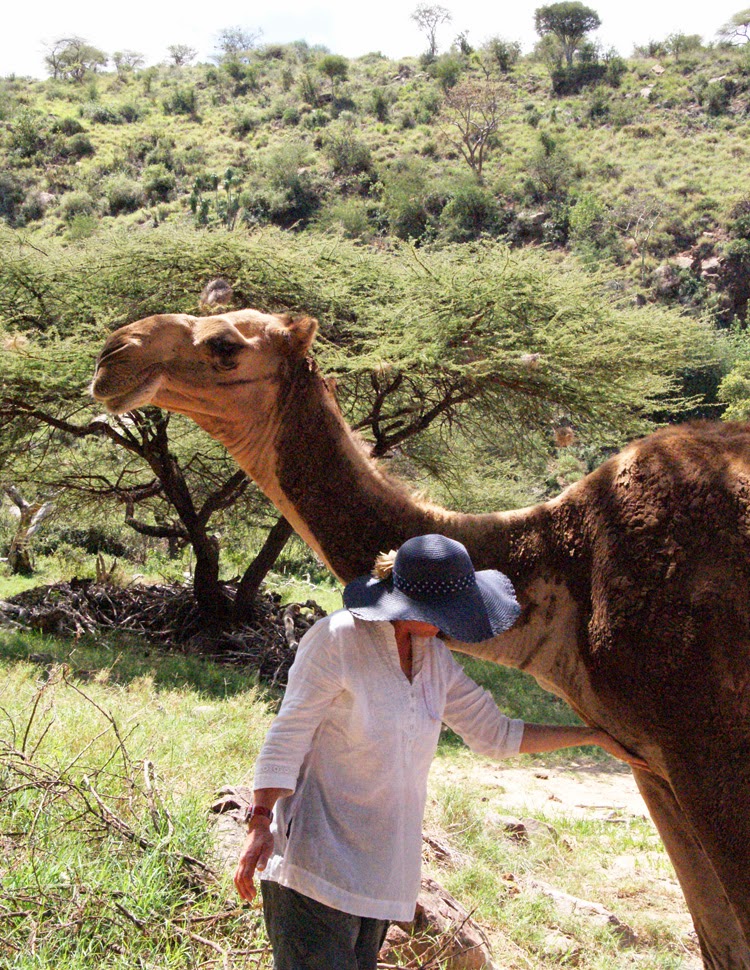 Two things you may not know about camels:

Milking camels are very popular in Kenya. The baby camel takes one teat and the handler milks the other by hand.

Male camels, which are kept entire, pee down their back legs to keep them cool. They are anatomically set up to let this happen. 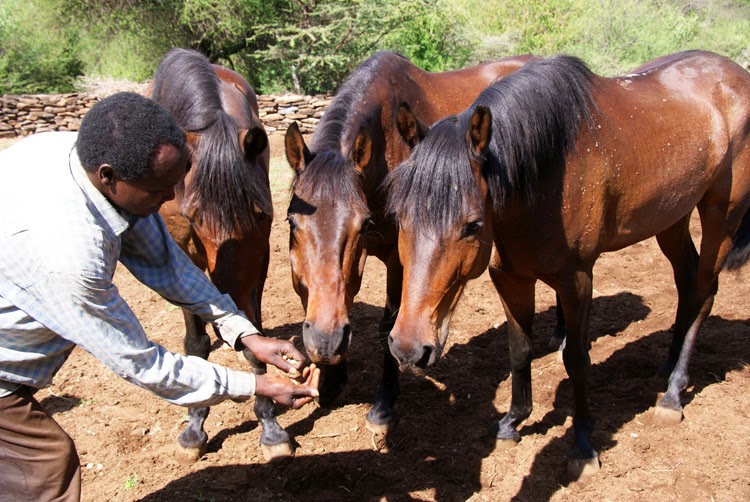 Having said a fond farewell to George, I just had time to admire Verity's three Somali ponies before we left. They are father, son and presumably the Holy Ghost!
Posted by Loisaba Wildlife Conservancy at 9:54 AM