Let's start next week off with a bit of colour. I have been to the London New Year's Parade on three occasions and each year it has got better and better. Although I no longer go, my good friend, Jo Monck, who is a great photographer, always paddling across the Solent for one event or another, went along as one of the official photographers for this years parade which was the best yet. She has agreed to me sharing some of those with you and if you'd like to see more then the link to her page is Jo Monck Equine Photography 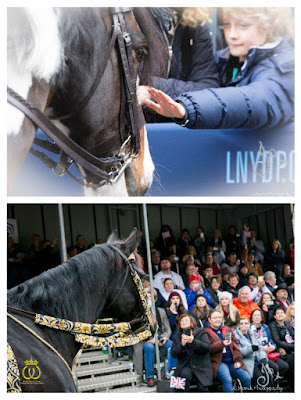 Speaking of 'ordinary riders doing extraordinary things', Jo says: A forecast of rain didn't bode well for this year's Parade, my iPhone, though inclined to be wrong, was promising that it was going to be 100% wet. It's never normally that positive about anything so I set off for London armed with a box of see through Poncho's to hand out, the thought of all those wonderful costumes getting soaked didn't sit well at all! Mayfair was totally deserted at the time I arrived, I approached the Ritz wishing that London was always this easy to get through!

Turning the corner I spotted the row of horse boxes lining Piccadilly like a temporary equine village set up in the city, horses were standing outside their boxes looking chilled yet curious at the busy scene that was unfolding before them, contemplatively munching on their hay nets, some riders had taken the opportunity to take a hack in Green Park and down the Mall, I mean how often do you get the chance to do that on a normal day?! 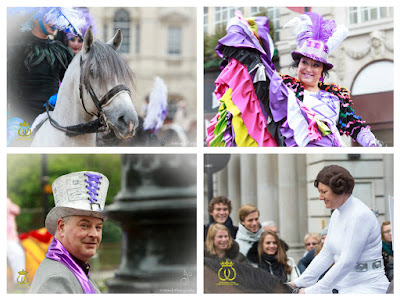 I grabbed a sausage baguette from the wonderful lady who had transformed her horse box into a temporary kitchen and began to set up my cameras. Its always tremendously busy behind the scenes at the Parade with an atmosphere of anticipation yet an air of calm, as we all know horses need to be surrounded by a stress-less attitude, especially when they are going to take part in something as big as this event.  As people began to get dressed up the major transformation from normal horse and rider to fantasy Parade figure takes place, ribbons and flowers are woven into manes, glitter is stencilled onto hind quarters and shoulders, hooves are painted bright colours, it really is quite extraordinary to watch, the scene had now transformed into one of a film set, there were Priscillas of the Desert wearing costumes guaranteed to brighten up the greyest London Day, ready to take the Parade by storm on their wonderful Iberian horses. Further up the line of boxes I find Annie Get your Gun, a Red Indian riding bareback and Quarter horses looking like they had just stepped out of a Western movie, a remarkably realistic Oliver Twist trotted past me, a step back into Dickens 19th century London! Then dancers from the Moulin Rouge in incredibly intricate ruffled skirts what a colourful happy group they made.

The Parade started off outside the Ritz Hotel led by Caroline Marsh who is the creative brain behind All The Queens Horses and its creator, this team were the Marvels, cartoon heroes, outstanding costumes and guaranteed to bring a smile to the crowds faces, followed closely by 101 Dalmatians, unbearably cute, the ponies wearing spotty onesies or painted with spots. 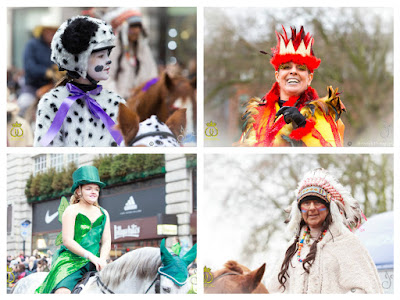 All the horses left in teams one after the other this year which really made a great impact on the crowds. ATQH's is the biggest group taking part in the Parade which has around 8,500 participants and possibly 500,000 people line the streets of Westminster to view it. It is the biggest Parade in the world and we are lucky enough to host it in London.

As the Parade entered Piccadilly Circus the Arabians came into view, all impeccably behaved and looking as if they had just popped in from the desert for the day, flowing manes and exquisite costumes, what a contrast to the lights of Piccadilly Circus! The wonderful Fjord Horses made up the team of Ben Hur, what outfits, and complete with a chariot pulled by a little Shetland pony.... 'what have the Romans ever done for us' ....

:) The gorgeous Fjords never fail to give me a nose rubbing shot, almost like they are exchanging information en route

:) Under the watchful eye of Nelson on his column the Star Wars and Mary Poppins teams made their way up toward Whitehall followed by Peter Green on his beautiful horse adorned with the most amazing array of flowers in memory of his daughter Molly who also rode in the Parade. 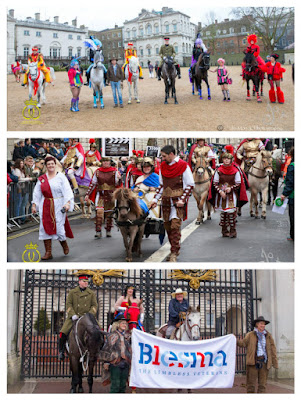 All the teams passed through Parliament Square under Big Ben that had only just rung in the New Year the night before and rode on up to Horse Guards and then up the Mall to Buckingham Palace where it finally started to spit with rain; my iPhone hadn't been wrong just its timing was slightly off thank goodness. As we walked back to Piccadilly the heavens opened, all the horses were by that time safely tucked up in their horse boxes a fabulous day over and another new year begins. What an amazing day every Parade never fails to reinstate how much trust the horses put into their riders and vice versa. Incredible creatures aren't they

:) As I got into my car to drive home I met Wonder Woman walking down the pavement, now where else would that happen other than the New Years Day Parade?
Posted by Loisaba Wildlife Conservancy at 6:32 PM