As promised, here are my notes on desensitisation with additional comments...

There are three different methods that are really useful for dealing with things that a horse might be afraid of:


Touch and move away (advance and retreat)

Where something is small and he can be touched with it, you can use the touch and move away method (advance and retreat) to introduce him to new things. A feather duster is ideal to start with as it is soft and friendly and smells of horses if you have used it before. I often use a fleece to get the horse used to something going over his back. Start by asking the horse to touch the object or your hand with his nose and once he does move it away immediately. Repeat this at least twice more before approaching the horse in a non-controversial area and, if he keeps still moving away instantly. Sometimes just touching the air above the place is enough. Repeat a number of times – if the horse moves way then stay with it until he stops and then move away instantly to reward him. You can then touch him with the object or your hand and again, if he stands still move away immediately. If he moves try to gently go with him without being predatory or exclaiming in any way. Repeat this a number of times and then touch again but if the horse’s skins twitches then again stay with it until it stops and then move away to reward the horse. You can then work your way to the place where the horse is reluctant to be touched and continue in the same way. It is important to remember that whilst you are asking the horse to cope with the touch, it is the release of moving away that teaches the horse that it is okay to be touched. You can really help the horse too by breathing out as you touch the place that he is worried about.

Later you can wait until the horse shows some sign of softening in his face – just a blink, a movement of the ear, a lowering of the head, a lick or chew or turning the head towards you should be rewarded. This teaches the horse to lower his own adrenalin and to relax. In time you may be able to rub the area gently but firmly and if you haven’t already done so, use your own hand. Again it is really important to make this the most pleasant touch that you can rather than scratching vigorously. Remember to move away from time to time to allow the horse to lower his adrenalin and to ensure that he knows you can be trusted to keep to the same rules. It sometimes helps to count in order to ensure that you do this.

The horse should always be told he is a good boy, quietly, for getting it right. In more difficult cases I would use clicker training as a positive reinforcement for the behaviour that I want - although some wild horses will not accept food from the hand.

Where something can be moved then the horse can be encouraged to follow and “chase it”. This encourages to see new things as fun and to believe that he has the power to move them instead of the other way round. This is particularly good for things like umbrellas, bicycles, tractors, dogs and so on. Ideally you should have control over both the horse and the stimulus – it has been shown in scientific experiments that this works much better than simply exposing the horse to something novel and leaving them to get used to it. Indeed, it is much safer – a loose horse may attempt to leave and get badly injured if turned out with something he is really afraid of. If the stimulus is something that you can’t handle/operate at the same time as you horse you need to ask someone to closely co-operate you. (Pick someone you trust who will not take over control). It needs to be a staged process, gradually increasing the degree of difficulty so that it is easy for the horse to take the next step. The more steps you take and the more thorough you are, the more likely it is to work.
With an umbrella for example, you would start with it fully down. Ask the horse to follow it and stop a few times so that the horse takes one extra step and gets nearer to it. In time you can unfurl and open up the umbrella and continue to use exactly the same approach and then start to raise it higher too. With a motorbike, you’d start with a really big gap between you and the vehicle and ask the horse to follow it at a very slow speed. In time you can decrease the gap and the motorbike might be able to go faster and be noisier. 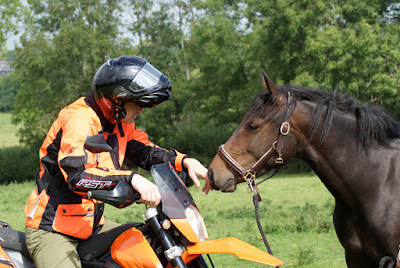 In both cases you can progress to asking the horse to pass the object going in the opposite direction and gradually decrease the gap between them as they pass.

Once this is well established on the ground, riding horses can be introduced to the same stimulus from the saddle.

Circling and backing up

Where there is a static obstacle then, such as a carpet, tarpaulin or puddle you can circle around it keeping yourself between him and the object so that he can observe your demeanour and feel protected by you. If you keep your adrenalin down, use a low soothing voice and yawn a lot, you can bring his adrenalin down. This should be repeated on both sides if possible as horses see things differently out of each eye (remember to change sides to lead your horse the other way). After this he can be encouraged to approach the obstacle. If he hesitates then don’t press too hard – find a good place to stop and then thank him by gently backing him off three paces. You should see his head come down (and accordingly his adrenalin: the neck is an adrenalin graph!). You can then approach it again and go further forward by just one step. You may need to repeat this several times just moving forward step by step until he goes the whole way over the object. A good horseman will resist the temptation to pull the horse the whole way across in one go and instead back the horse off every step of the way. 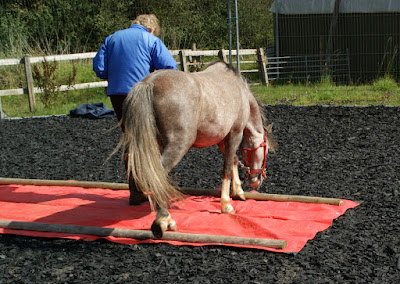 The first time the horse goes across the object, he may rush especially when he has all four feet on it. By walking over it another couple of times at least, he can be encouraged to slow down (and even stop). If you lower your own head and really look at the obstacle, you often find that the horse will drop his head too.

For bridges, ramps, streams and rivers, you would have to leave the circling bit out but the backing up technique still works. Indeed, the backing up element works with anything that is stays more or less in one space.
This same technique can also be applied for ridden work.

Later this week - note on ear shyness and long reining...

Posted by Loisaba Wildlife Conservancy at 9:24 AM