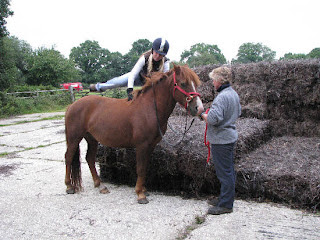 I have been working with another horse with a farrier-phobia. Unlike the earlier horse, this one was happy to let me hold it's feet, tap them with a metal tool and move them about but the instant the farrier arrived she reacted violently by rearing, trying to run through me and then trying to bite the farrier. The stupid thing is that this farrier is the nice farrier but she still hasn't forgiven the last one. Working with the touch and move away technique, whereby Alex stayed with her when she was reacting and walked away when she committed herself to standing still (reverse psychology), we were able to get her really calm and she stood sweetly to have three of her feet done. However, when we got to the right hind she went on strike again, clearly indicating in my view that she has some genuine reason for not wanting to hold this leg up. I suspect that she has pain in her pelvis or hock and the owner will get this checked out very soon. By putting her leg back down at frequent intervals and letting her rest, Alex was able to shoe this last foot whereas this is the point at which the last farrier used to get very cross and hit her. Can it be a coincidence that this is the same farrier that upset the other horse? He is really predatorial in his general attitude too. When a genuine horse starts to be awkward about being shod then we should also suspect that there may be a physical reason and by listening to the horse instead of telling it to shut up the problem won't escalate so that the horse feels the need to run away or defend itself the moment anyone smelling of a forge appears.

There's no problem getting Julie to hold her leg up and Jester is now much more relaxed about being mounted.
Posted by Loisaba Wildlife Conservancy at 9:49 PM