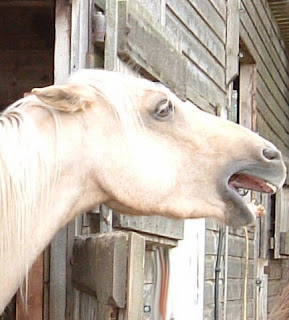 More frequently I am being contacted to help with horses and ponies that are aggressive. Aggression, which is a natural behaviour within a horse's range, can be brought on by chronic or acute pain – the horse just feels grumpy and his threshold for annoyance is lowered. We have to take an ethical approach so that we address any causes at the same time as making it clear to the horse that the behaviour is not acceptable. There is growing evidence, for example, that both competition and lesiure horses that are kept in for a high percentage of the day frequently suffer from gastric ulcers. These are caused by acidity in the stomach. Horses are designed to eat for about 18 hours a day and only salivate when their jaws are moving. The saliva counteracts the acidity of the stomach. Unfortunately the only way of confirming the presence of gastric ulcers is through endoscopy by the vet but vices such as crib-biting are thought to be symptomatic of gastric ulcers.

Aggression can also be brought about by a horse’s desire to protect itself. Particularly when a horse can’t get away from something that is frightening it or hurting it, it may resort to self-defence. This is then reinforced if it works. Horses may either slowly or quickly escalate their behaviour until it has the desired effect.

The most severe sanction that I would ever use would be a well timed rattle of a rattle bottle but on the whole some "loud" body language and a kiss-kiss noise are sufficient. I won;t hesitate to be big in this way if it is behaviour that I want to extinguish. I love Monty's phrase that "to attack the point of consternation is an open invitation to war"; a poetic way of saying that hitting doesn't work. Too often it is interpreted as part of the game or battle.

A pony we had in recently had learned to direct his aggression straight at his handlers always geting them to give up. Indeed he had been able to keep going for well over an hour with me and all I wanted to do was to touch him with the hand on the stick. It was tempting to ignore and avoid this issue but increasingly he was saying no to being touched by any third party or any foreign object no matter how well intentioned. The orginal trigger seems to have been invasive veterinary treatment which no doubt hurt. By now though his owner couldn't even remove bot eggs from his body without a fight. I had vision of him attacking a judge if he ever won a prize(!) or continuing to generalise the behaviour to anything else he didn't quite fancy doing. Built like a small bull, albeit a beautiful one, he resorted to biting, kicking, striking out, barging, squashing or leaving. All good fun. I felt that I needed to work with him on consecutive days with no time constraints. I revised his groundwork first and made it clear with judicious use of the rattle bottle on only two occasions that he was not to invade my space and then spent time working on de-sensitisation. As I suspected, he was hyper-sensitive to touch (like me!) and by using firmer pressure rather than more tentative pressure I was able to ask him to cope and then even enjoy touch. Over the next few days, Sheila, Julie, his owner and I all quietly worked with him for an hour or so quietly with objects ranging from the feather duster to a noisy massager (which he loved) and the hand on the stick which he began to accept readily. We tried to work with him rather than against him and also offered him aromatherapy oils which he relished - yarrow, lavender, peppermint, rose, rosemary and thyme - at first but he lost interest in all of them by day three. Yarrow is indicated for hyper-sensitive horses. He's back home and doing fine now.
Posted by Loisaba Wildlife Conservancy at 8:34 AM