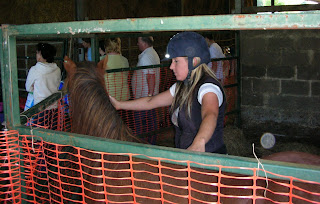 Dartmoor was in its autumnal glory as we drove across the moor to Widecombe. Once again we were able to work with Dartmoor ponies which are so naturally amenable and uncomplicated. Derry did a fantastic job with two entirely untouched and unweaned foals whilst Julie and I worked using a combination of touch and move away and clicker training on 3 older ponies. Julie's pony had been ear tagged so although seemingly bold he was especially worried about his ears. My first pony took to everything like the proverbial duck and had his first headcollar on, touched all over, led and feet handled within an hour. In the afternoon, Annie took her treats regally and looked very fetching in her purple headcollar. sadly all of these ponies will still be going to the sales on Friday where they are at risk of going in the wrong direction. Natalie, the Chairperson of the DPTC will show them off to their best effect on behalf of their owner and cross her fingers for their futures.
I must admit that my jaw dropped when one breeder told me that they preferred to have their ponies ear marked ( a shape cut of the pony's ear) rather than ear tagging them as a form of identification. They have already got brands that would easily pass for helicopter landing pads what more do they need? I am still working out how I feel about the practise of blindfolding them while they are being branded - would this really be less traumatic?
Posted by Loisaba Wildlife Conservancy at 9:33 AM