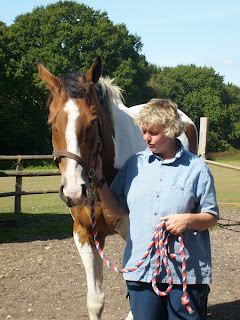 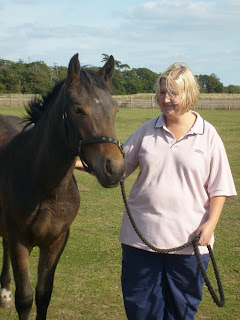 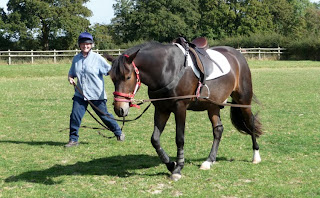 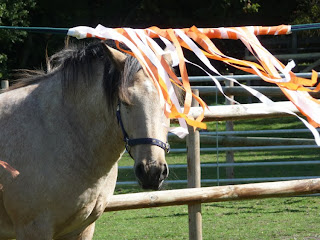 The end of a really pleasant week, with really pleasant owners, where I have had my hands on 9 ponies other than my own, mainly doing groundwork but with the odd bit of long lining and one loader. Tosca, the horse at the top, proved to be really responsive and a complete contrast to his owner's other horse who must be the most laid back horse I have ever met. Next down, Ruffles, is a 16 month old New Forester and the lady in the photo has been none too keen to touch horses before this. Matrix, photo 3, is also a New Forest pony. He was introduced to long reining today and after a little worry about the reins going behind him, he accepted direction nicely and carried his head long and low; just what we wanted. Jack has made his way onto this post again as today he coped with and went under this flappy thing for a click and a treat.
"I just wanted to thank you for coming out last Friday 11th September to work with my horses, it was such fun!! It was so amazing that within half an hour of working with them I saw more about their characters than I had before, and it makes me even more determined to continue with Tosca, because I could see what a worried switched on sweetie he really is and anything scarey he does has been man made (I think and hope?!) !! Thanks again Sarah it was lovely meeting you, not only are you brilliant with horses, you're very funny too!" TL
"Ruffles has been a little angel since your visit, have managed to catch him every time I wanted to & he even left his hay the other day to join me & have a game of follow the leader, he would follow but not get in my space then when I stopped he would stop next to me (but not go past me) for a lovely body rub!"
NV
Posted by Loisaba Wildlife Conservancy at 6:24 PM