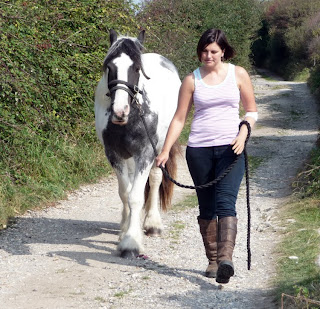 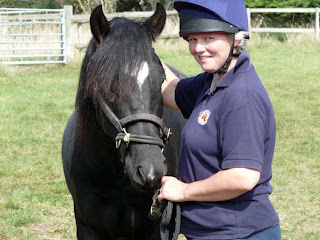 It was off to Weymouth on Saturday where Julie and I worked with Ziggy and Danny, both youngsters. Ziggy is a solid bodied and solid natured horse and pretty bombproof. Danny is a character and has been leading (literally) his owner a merry dance. By the end of the session they were at least dancing in unison! It is so easy to be overly benevolent with young horses that you've bred or bought when they were tiny. They still need some ground rules - and they certainly need leadership.
On Friday I worked with a fifteen year old cob who was doing a similar thing.
"Thank you so much for Fri. I really feel that I am more in control now I know what we were both doing wrong. I practiced leading again tonight, asking him to move over with the pressure on his hip and he tried once to kick out and I managed to react appropriately, not crumble into a heap as usual. I was very proud of myself but not as proud as I was of C when I managed, after desensitising for a short period until he was happy and consistant I, relatively effortlessly, put 1 front boot on and off twice and he just stood there!!! Amazing. I know tomorrows another day but baby steps... "
CF
E-mail 29.9.09: "Connor has been such a good boy. His leading has been fab."
Posted by Loisaba Wildlife Conservancy at 8:12 AM