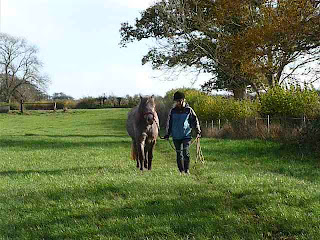 I followed a rainbow all the way to Bristol this morning to meet two clients and their respective grey ponies. Look familiar? Silver the first pony has clearly got some Highland Pony in his breeding so there were echoes of Razzledazzle. Silver is only four but has taken to running rings around his owner (quite literally) when she takes him out in hand. We worked with different levels of pressure and release - some lighter than she had been using (for backing up) and some stronger than she had been using - to establish her body space and it seemed to work very well.

"Thank you very much for your report and the pictures. Just wanted to say a huge thank you for the time you spent with Steve, Silver and I yesterday.It was really helpful and enjoyable. I will make sure that I continue everything you taught us. Incidently, I think Feather must have been making notes other the fence as I did some groundwork with him this morning and he was a little star!" SD 17.11.09

The second pony was half Arabian and almost ready to start her ridden work. My role was to look at what they had done so far, to get her going long reining and then to suggest how they might progress in the future. So difficult for owners when they are not even allowed to ride in their field and have to do everything out on the roads. Not ideal.
Posted by Loisaba Wildlife Conservancy at 10:02 PM