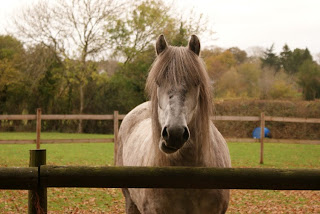 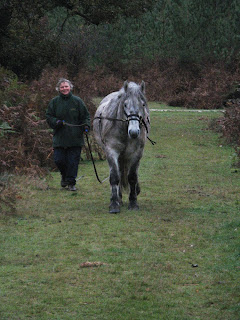 Razzledazzle - roamin in the gloaming.....

Today I went out to a Shetland pony called Gilfey. He's a substantial chap with a proper Shetland horsey head. His owner has come a long way with him since she got him. When he arrived he used to stand and shake in the stable and he just didn't want to be touched at all. He has reached the stage where she can touch him on his left and put a headcollar on him and even pick up his left front foot providing she is really careful and makes herself pretty small. Using the "touch and move away" technique that's described in my book, we were able to desensitise his right hand side and to touch him all the way down his back legs. I picked up both of his front feet and I don't think it will be long before Fiona can pick the up the backs - they just need lots and lots of desensitising first. Once all this has been consolidated, she should be able to get his feet trimmed by the farrier.

In the meantime, Jack is having his front feet lifted off the ground and I hope it won't be long before I can hold his foot. All of this was achieved in just one session since Guy, the farrier, was rude about his feet. They don't need trimming but they do look a bit rough around the edges; he's never had the done in 12 years. Incidentally, he's also jumping doubles now!

Razz is being long reined out into the Forest and seems to be really enjoying himself.
Posted by Loisaba Wildlife Conservancy at 7:32 PM