17th November, 2009 What happens when you let a man name a horse 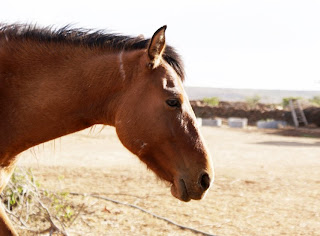 This is Yamaha, one of the Ethiopian ponies that I met at Loisaba when I was in Kenya. The only stallion amongst the 14 they bought, Tom was allowed to name him. He's got some interesting scars from the abuse he has received at the hands of men in Ethiopia. I was saddened to hear from Jo that he had been missing for three days; she feared that he had been eaten by lions. The ponies at Loisaba tend to stay close to the farm but can actually go where they like during the day. At night they come into the stable area where the only worry is caused by the elephants raiding the water trough.

Good news from Jo today: "Yamaha was found after more than a week of tracking! Our tracker vehicle eventually caught up with him unharmed and a bit spooked in a place called Baragoi in Northern Kenya. If you have a look on a map you will see it is hundreds of miles a away and we can only conclude that he was on his way home to Southern Ethiopia! We are not sure why he ran in the first place, mid morning before a major rain storm, I assume a predator spooked him. He was then chased by children and dogs from the Samburu tribe because having never seen a dunn pony before they thought he was a bad omen and belonged to the Pokot (the tribe that Sams are at war with) so he narrowly missed being speared too. I have been in the stable with him for a few hours a day and he has settled but did snatch the duster out of my outstretched hand with his teeth and trampled it, he has a terrible temper.I am sure in time I will win him over again." Phew, that's okay then. He must have nine lives.
Posted by Loisaba Wildlife Conservancy at 5:30 PM