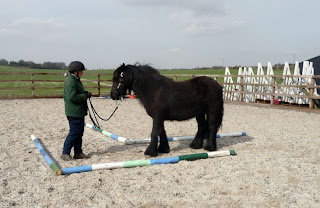 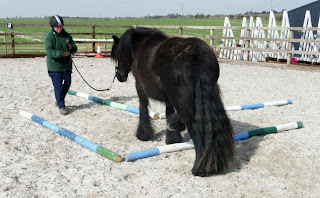 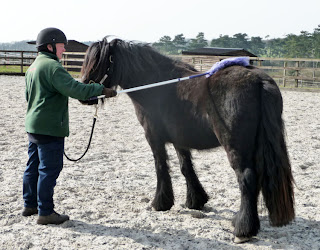 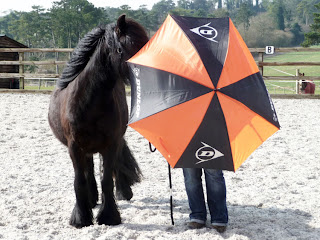 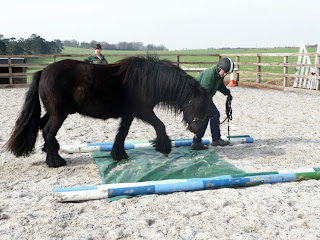 On Thursday I went off to see two 'loaders' which included one experienced horse and one not. The one that was experienced was yet another that had previously been 'tapped' with a whip by a horse trainer in order to get her to come forward and load. (The trainer stands at the front of the horse and taps with a schooling whip on the hindquarters until the horse works out that it needs to move forwards). Once again, the net result is a horse that is no longer afraid of loading but is afraid of what happens at the bottom of the ramp. Lots of agitated kicking out and piaffing with her back feet. We told her that this was never going to happen again, used gentle pressure and release, rewarding even the tiniest move forward with a lovely neck rub and a click and treat, and there she was loading happily. Once on the lorry she was happy to stand, turn to the correct position for travelling and stand at the top of the ramp playing I'm the Queen of the Castle. The second horse simply needed to know where she was supposed to go. The lorry has a side ramp and she simply couldn't see where there was any space for her to fit. Both horses were entirely calm in the box itself and apparently travel well.
My first pony today was Teddy, a Fell. He walked through the poles, over the poles and accepted the feather duster. He followed the umbrella (beyond repair I think since Graylie molested it) and then walked over the tarpaulin. He is very careful with his feet this one. Next week we hope to introduce him to long reining.
Finally today it was off to teach Luke the association between touching a target, getting a click and a treat. He likes to carefully consider what he is being asked to do. I cheerfully commented that it was a bit like watching paint dry and then realised that he is actually a paint horse so how appropriate!