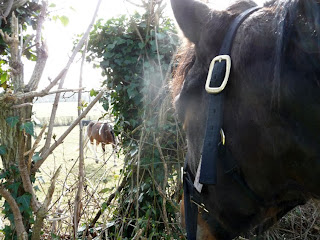 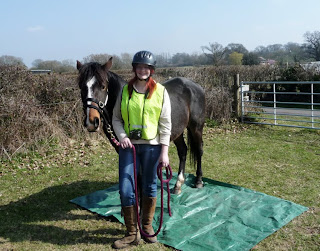 This is Herbie, who went for his first walk down the lane yesterday and away from the other horses. As soon as we left the gate his respiration and adrenalin levels went up and so it was important not to stretch his confidence so far that it breaks. The best approach is to think of little petals around the centre of the flower (his field) and to just take small circular walks around those. In Herbie's case we walked as far as the first tree and then back to the field and then in the opposite direction to where there were lots of daffodils growing outside a house. Back, with a quick visit to the field to bring his adrenalin levels down further and then along to the drain cover which we encouraged him to inspect, back round to the daffodils and then as far as the horses that live in the opposite side of the road. In this way we ignited his curiosity and found him wanting to go further each time. Back at the paddock we introduced him to the feather duster, umbrella and tarpaulin, and as you can see, he took them all in his stride.
Posted by Loisaba Wildlife Conservancy at 9:33 AM