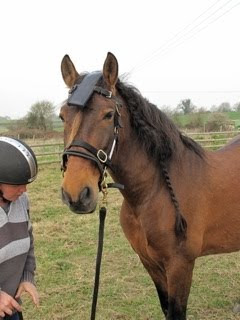 It has been almost two years since anyone has worked on loading with Rafargo. At that time he was very nervous about going on board and even more worried about backing out. He had only recently arrived from Spain - a long old journey in a horse box - and didn't know his new owners all that well. The trust that has built up since then and the work they have done on the ground and ridden, asking him to soften, has paid huge dividends. On Monday he was going in and out of the trailer very carefully and was much more relaxed about the whole thing. Yesterday I started trailer training with Missy too. When she arrived with her new owner she was literally all over the place but has since settled and seems to know that she has landed on her feet. She has turned into a really nice mare, affectionate and willing. I doubt that anyone has ever taught her to load properly and suspect it has always been a battle. Yesterday we made a good start -simply asking her to go in and out a few times before ending the session.
Posted by Loisaba Wildlife Conservancy at 9:54 AM