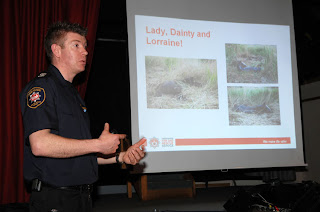 Hopefully it won't be long before the Friends of the Hampshire Animal Rescue Team Charity is set up. Jenny and I went down to the fire station to finalise the aims and objectives for the charity yesterday. The forms should be submitted to the Charity Commission soon. A talented graphic designed called Andy White is working on a logo for us. The fund got a good boost (£650) last night from friends who attended a talk by Jim Green at Godshill Village Hall following on from the rescue of Mischief the New Forest Pony from a swimming pool.