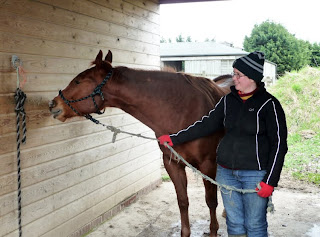 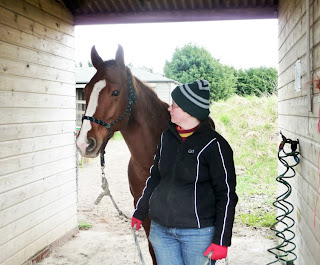 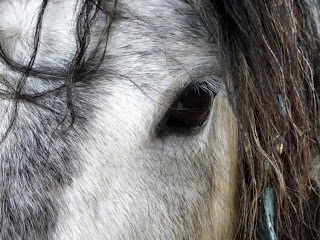 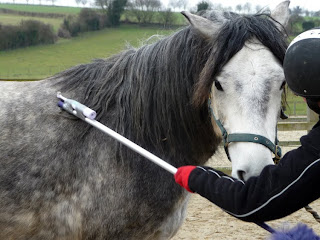 It's been three years since I last worked with Nina. At that time she needed my help with Graylie her four year old Forest-bred New Forest pony who was really frightened of being around people at all. That weekend we got him accepting the headcollar easily for the first time. Since then, she has done some cracking work with him and her now five year old Quarter Horse, Pep. This weekend we looked at lots of little issues and bits of work including standing in the wash room and leg handling for both of them. Pep seems to feel quite vulnerable in the wash room (possibly because he thinks 'wash room' is a command - see top photo!!) and we spent some time walking him through, asking him to stand absolutely still for an instant and then leading him away again. We then lengthened the time for which he was asked to stand incrementally and then made sure that he was committed to standing still before he was taken forward again. It didn't take him long to become much more relaxed. Graylie has developed a strategy of determinedly putting his back feet back down one they have been picked up and that has been working well for him. We used the walking stick, which can be padded, to lift the foot up and hold it for a little while before gently putting it back down again. This saves the handler's back during the training stages and is less risky than using a rope. In the final photograph of this set, Graylie is accepting the approach and touch of an electric toothbrush as pre-preparation for clipping. As he has never had a battle with clippers or being twitched, he had few qualms about this.
The countryside where Nina keeps her horses only a few miles out of London is very pretty and the horses are used to trains and...eagles!! She lives just next to Greenwich, where the Olympic Equestrian events will be taking place, in a flat that is just as quiet as our house and yet is only two minutes walk away from the tube where she can get to central London in no time at all. I was rather envious of the Nepalese, Italian, Thai, Indian and Chinese restaurants that are all within walking distance.