This afternoon Tracey and I went off to meet L and her pony, Jaine, that she took in early in the New Year. Jaine's story is a pitiful one in that she had to be rescued from a 'rescue centre' where the owner frequently advertised for free horses for her therapy centre in Wales. The next catastrophe struck when the owner of the sanctuary that took her in died whilst attending to her when she gave birth to a foal on Christmas Day. She, along with several other horses, then needed to find yet another home. At some unknown time this mare also suffered an eye injury which led to the loss of her sight on the left. At long last she has fallen on her feet and she, and her foal, now have a permanent home with L.


I should imagine that Jaine has always had to rely on her own resources and tenacity to look after herself and the foals that she has had. Accordingly she is quite adept at pushing people to get what she wants or pulling them to where she wants. Estimated to be around sixteen years old it is amazing then that in under sixteen minutes this little mare learned to just stand still and relax rather than fidgeting about and to earn her lovely rubs by simply looking charming rather than pushing in to people. Unlike Linda Parelli I didn't feel the need to swing ropes around her head or hit her with the clip as is shown in one of her DVDs. I did however switch to leading her on her offside so that she could actually see my body language and have some sort of clue as to when I was moving away or stopping. By the end of the session she was busy matching her owner's body language and standing still to accept a lovely rub. 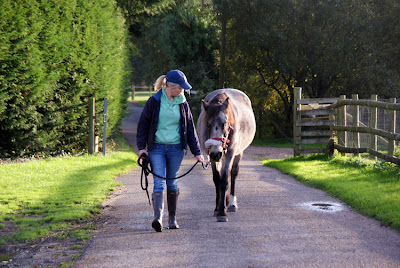 "Jaine has got it!! Today we did more practice leading, Jaine was so attentive to my body language & mirrored every gear change from me; slow walk to fast walk to jogging back to very slow walk, it has brought a bit of a lump to my throat to be honest as this is huge progress for her, she has come a long way from the old Jaine she once was & I cant wait to open up her world even more....." LE on Facebook