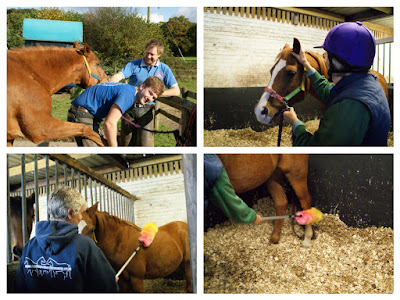 Khal seemed to be in a very mild mood this afternoon, standing in the sun, having his feet done by Jim Ravenscroft and his apprentice, Jack. They have no trouble with him and indeed neither did we even when we went into the stable with him although he is very particular about how he should be touched and transparent about what he likes and does not like. He is no longer worried about the feather duster and therefore it could be used to desensitize his back legs. Having said that, he has had quite a grumpy week and has kicked someone who went into his stable. There could be physical or psychological reasons behind this long-standing defensive/aggressive behaviour ranging from gastric ulcers, general soreness, through to simple instinct or learned behaviour. If he was mine I would be starting with a gastroscopy and a visit from the physiotherapist. 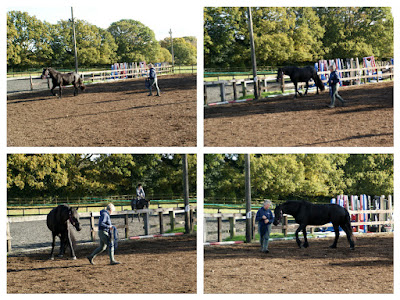 I was asked to do a Join-Up with BB. Ideally a Join-Up requires a particular set up, a round pen and a quiet environment, since it relies on the horse and the handler being able to concentrate on one another's body language. With riding school horses setting out for hacks, two lessons going on next door, and the use of a square school we decided instead to adapt Join-Up techniques and body language to a gentle session of free schooling. Accordingly we were not strongly sending BB away or intent on giving her exercise, we just wanted to achieve a meeting of minds through clear communication. 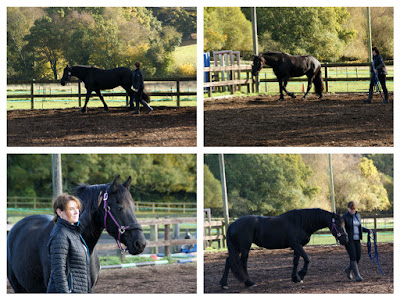 Even though BB's attention was occasionally taken by other things, she worked really nicely with me and then with Kathryn. 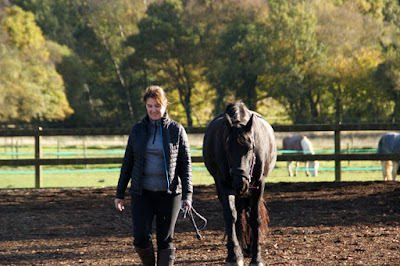 She was very pleased to go out for the rest of the day... 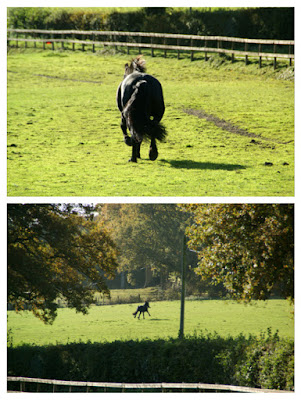