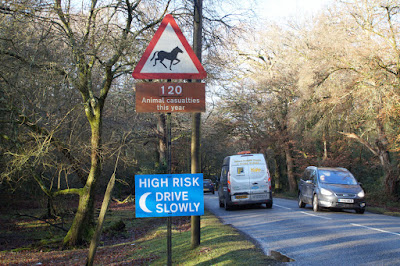 Good news that since the clocks changed there have been half the number of collisions with animals than the same period the year before. Good news also that there have been less animal fatalities than the year before. However, the message is still not getting across as it should be and the overall figure for animals being HIT by VEHICLES is appalling. People come up with all sorts of impossibly expensive, and often impractical solutions (from fencing to speed bumps) given the sheer number of roads that wind their way between villages in the Forest. The most inexpensive one of all, the one that would cost nothing, would be for drivers to change their attitudes and drive with less speed and greater regard for the animals. The Forest is one of the few remaining truly wild places in England and without the animals it would need to be managed entirely mechanically and would lose its unique character. Surely everyone has a vested interest in keeping the Forest as it is?

I accept that there may be the occasional genuine accident but I don't buy the often used excuse, especially when there are no witnesses, that an animals suddenly shot across the road. Quite apart from anything else, drivers need to be aware that animals may suddenly shoot across the road, but I travel the B3078 every day and I rarely see animals shoot across the road. If the pony that was standing like a statue right next to the road suddenly wakes up and decides to cross the road then the driver should have been aware of that 'statue'. It's sad that drivers slow down more to stare at a dead pony than they do a live one.
Posted by Loisaba Wildlife Conservancy at 9:57 AM