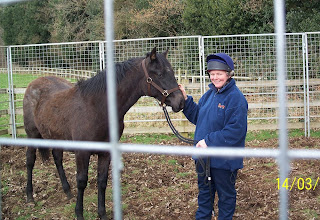 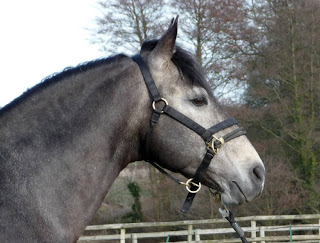 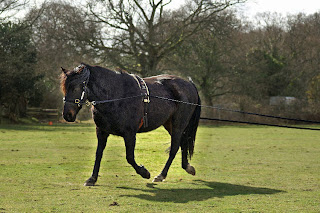 Top: Aquilino, Middle: Zimbral, Bottom: Petra
What with selling David's toys on e-bay, arranging to go to Kenya for July and work, I haven't been able to get near to my blog site for ages. Selling Dinky toys and sets of Lego is a lucrative business and the contents of David's Mum's loft have paid for Chancer's hay.
In the meantime, Petra has been earning her keep teaching people to long rein. She has also officially gone barefoot and is being attended by Tim Mockford, Equine Podiatrist. I'll let you know how she and Chancer get on.
This week I seem to have been working with continental horses the whole time - Arthur, who was one of the French Rescue although he was in utero at the time, Betty, Aquilino and Zimbral. Arthur is a solid little chap, most likely a Breton or an Ardennes cross. He also has a solid nature and should prove to be a reliable soul. We were teaching him how to pick up his feet for the trimmer. Aquilino, an Andulusian colt who is now 10 months old had his first headcollar on yesterday. It was a delicate job because he is pretty colty and nifty too but all went well and he looked very smart in his new headcollar. By the end of the 2 hour session he had started a few steps of leading and had his wormer without any fuss.
E-mail from Frazer (owner of Aquilino):
I was delighted with the progress we made and it was great to see him with the headcollar on and the wormer done. I thought you did a fantastic job!!
I finished the day with Zimbral who is heaven on four legs. He is maturing nicely and starting to be ridden regularly. He is turned out during the day now (he wasn't turned out at all in Portugal) and really enjoying himself.
E-mail received from Emma his owner: "I dread to think how he would have ended up if I hadn't had sessions with you from the beginning....."
Great news about Intelligent Horsemanship and the British Horse Society. Kelly's unfailing diplomacy has finally started to open doors and both organisations are starting to recognise that there is nothing mutually exclusive and much that is entirely complementary in the techniques that they use. Good tradition has never included the use of violence and much of the BHS manuals is about safe systems of working with horses. If this was infused with horse logic, instead of some of the military logic from which the BHS derived, the welfare of horses would definitely be paramount.