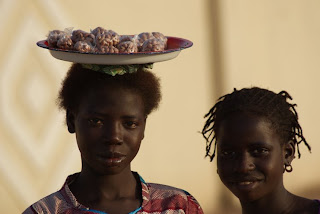 Today we met Hilary and Steve who work for the GST. They became involved through a chance meeting with a little girl on the ferry crossing at Banjul who asked them to sponsor her through school. They discovered that it would cost only £30 a year to do so. Since then they have both retired and spend 7 months a year in the Gambia building schools and libraries and the rest of the time fund-raising in the UK.

The Gambian Schools Trust was established as a registered charity in January 2001. Originally, its sole aim to assist in financing primary education in the West African country. The government there provides very basic state education for those over seven years of age whose parents can afford it. There is no state provision for children under seven years of age, for whom the only available education is that provided by voluntary groups or the private sector.
The Gambian Schools Trust assists through providing direct funding for specific projects, by refurbishing existing schools and resources or building new ones in response to local requests and by supplying school resources and equipment which have been donated in the UK. The Trust also assists by enabling teachers from this country to share their expertise on a voluntary basis during short stays in The Gambia. The website for this charity is: http://www.gambianschools.org/
Posted by Loisaba Wildlife Conservancy at 6:11 PM