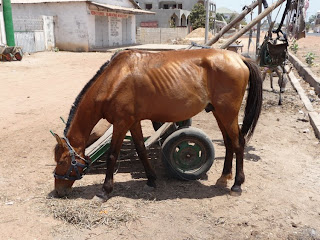 Yesterday I said hello to the Gambian horse and gave him a bit of a massage which he seemed to appreciate. I also got the flies off him so that he could give his tail a rest. Despite being very thin, his coat really shines and he has that Akhal-Teke metallic finish of bright gold. He is an entire and tied to his cart by a head-collar rather than his foot which is traditional around here. His owner clearly likes him. In contrast, the donkey we met today is furious with people and would attack if you got close enough.
Posted by Loisaba Wildlife Conservancy at 8:25 PM