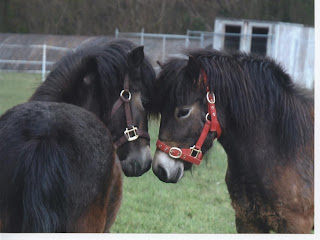 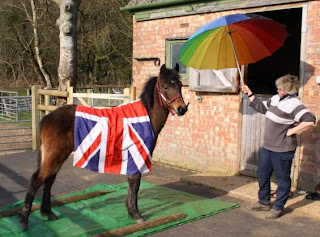 At the beginning of this week, I have visited two sets of yearlings – one lot of Exmoors and the other, three New Foresters that I worked with at my course in November last year In each case, the owners have been working with them regularly over the winter. The New Forest ponies are now pretty blasé about everything whereas the Exmoors are still struggling to accept human contact – particularly from strangers. This begs the question whether it is nature or nurture that causes the difference. Regrettably one of the Exmoors has had to be forced to accept veterinary treatment (he had an undescended testicle and the vet insisted that he was sedated and twitched each time this was checked) and yet his owner has consistently worked with him in a kind way. Accordingly, he is much calmer with her than with anyone else. It just struck me that whenever Exmoors are not progressing, they may be regressing, in a way that I haven't observed in any other breed of semi-feral pony. The New Forest ponies soon worked out on which side their bread was buttered and are much more confident and co-operative. There may have been other factors at play here – the New Forest yearlings live together and play for most of the day; the Exmoor colt and the Exmoor filly have had to be kept apart to avoid the risk of him covering her; the New Foresters have been in close proximity to older and friendlier ponies whereas the Exmoors have only had one elderly mare to look to. The New Forest yearlings had “my” method of training from the outset whereas the Exmoor colt was cornered to have his headcollar on to begin with as did the filly. In both cases, the owners are absolutely committed to training them in a non-violent way and both sets have really fallen on their feet but the owner of the Exmoors has got more of challenge on her hands and a lot more work ahead of her if she is to succeed in the end. In the meantime, the owner of the New Forest ponies will have so much fun working with her guys with less risk of being accidentally or even deliberately kicked or bitten.

Postscript (7.4.09) Since my visit, both William and Coco have made some real progress and have become much easier to catch even when they are in together. Once again, time, patience and technique have paid off.
Posted by Loisaba Wildlife Conservancy at 8:17 PM