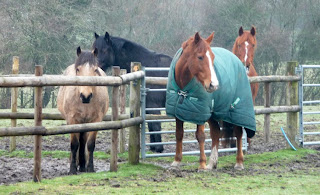 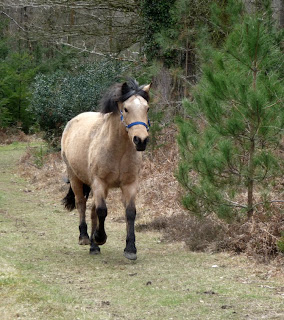 Theoden has blotted his copybook. He has been bullying poor Chancer and ripped his rug yesterday (picture shows him with a brand new one on that I happened to have in the cupboard!). I think he is partly responsible for Chancer's recent weight loss because he just keeps him on the move so much even when they have got a round bale of hay. Accordingly I decided to separate them last night and this morning re-jigged everyone so that Petra and Theoden went in together and Chancer is just next door until Davy goes when he can go back in with Jack. The idea had been to keep the slimmer ones together and the wider ones together until they were all about the same size! None of them are far off now. Theoden and Petra did have a good set too - it's always worrying putting horses together but two equally strong characters is even more so. It was interesting to see Petra go to the second feed bowl in deference to Theoden when I put them out but then to see her take possession of the water trough. All was peaceful when I left and I am hopeful of a Victoria and Albert type relationship. No such thing as equal opportunities with horses.

Leaving that lot to settle down, I took Jack out in to the inclosure and walked with him loose. If I leave a small pile of food on the floor, I can go a long way before he needs to catch up and then he comes at a smooth canter and looks fantastic. He always pulls up before he gets to me and pauses nicely for his click and treat. He could be a bit daunting otherwise. I'm wondering if there is scope for a game of hide and seek or whether he would just give up and go home if he couldn't see me. Out of sight is out of mind with horses?

Next I took Davy for a walk and worked on asking him not to push into me with his shoulder when he is worried. This is particularly pertinent when he is walking through mud when he would rather walk on top of me than get his feet wet. We spent a happy hour and a bit walking through the thickest gloop we could find and wading around a couple of ponds. I came home soaked to the knees hoping that I have helped him to realise that he isn't going to get stuck or drowned. He went over the wooden bridge nicely and also jumped the streams that I asked him to. By the end there was certainly no more shouldering and much more relaxed feeling horse.

Just an added note about this. It is very easy to set up a horse to shoulder barge. The temptation when they get ahead of you and have too much energy or adrenalin is to allow them to circle around you and let them do that for as long as it takes. However, inadvertently you can teach them to bring their left shoulder in to you and to start to move you in this way. Once they find it works, they can do it over and over again and it reinforces itself. I tend not to circle horses in this way and instead insist that they stop and stand or even back up. I don't let horses overtake me. However, if a horse is shoulder barging then I do circle them but all the time making sure that they move their shoulder away from me - this involves taking control of the circle yourself and making sure that you bring the horse's head towards you and his shoulder away. As soon as the horse moves that left foreleg away, you can stop circling. In Davy's case, body language does absolutely nothing and I have resorted to a twirling rope to keep his shoulder out and thinking about his left leg going through an open door towards or in front/ behind his other foreleg. However, I do avoid hitting him with it. I've never been a fan of twirling ropes but feel I have little choice with a horse that is intent on bulldozering people.
Posted by Loisaba Wildlife Conservancy at 4:49 PM