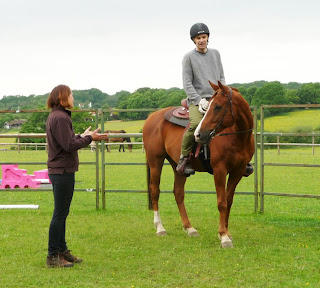 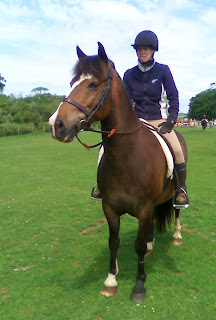 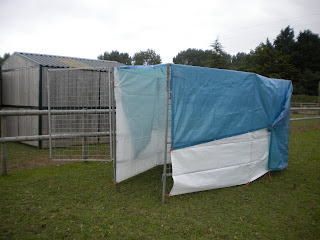 I feel as if I have a bit of catching up to do. On Friday I had me second lesson on Theoden and we worked on getting him more responsive to a light leg aid. David then did the same with Chancer - you'd think a racehorse would always want to go but he's a laid back sort of chap.

Meanwhile Maverick has had his first rug on, Jane has built a pretend horsebox for Mars to practice in and Magnus has completed a Spider Ride on the Isle of Wight with Annie. Bree is described as fantastic to lead and Clare is picking her feet up regularly and starting to practice loading her using a bit of clicker. At the fields Flicka is going to go home for a bit to have a rest and Ludo is still doing exceptionally well; he's very tuned in to intent and Jenny is using the footfall technique to ask for upwards transitions and an out breath to ask for downward ones. Jack is now having all four feet picked out at long last although I did think I had blown it when i made the mistake of putting some vetwrap bandage on his surcingle as preparation for accepting a long rein around his bottom. No sooner had I unravelled it a couple of feet than he took off and spent the next half an hour running away from it. For all those people who keep asking me why we are not contemplating riding him, they should have seen him move and just how frightened he was. Fortunately he was prepared to forgive and forget and once I'd rescued him from it, he settled down and we did some jumping to take his mind off it. Riderless showjumping for the olympics please. Funnily enough I am just writing an article for Kelly on the similarities between being a barrister and being a horse trainer and how we were told at Bar School never to ask a question of a witness that we didn't know the answer to. In truth I hadn't really thought what Jack's answer would be to a bright green Vetwrap streamer!

The stallions should all have been taken in this weekend and I was pathetically pleased to have been asked to bring High-Jack in. He spent an afternoon in my pound with Blue and a bucket and he was a gentleman to catch.

Fellow RA and physiotherapist Sue Palmer and her photographer husband Simon came down for the weekend. Simon has taken some beautiful shots of the Forest ponies which included a pepper coloured foal that was really friendly, the grey stallion Furzey Lodge Zennica and some donkey foals. Hopefully he will share nicely and we can put some pictures on here. Like me, you'll have to wait though.
Posted by Loisaba Wildlife Conservancy at 7:08 PM