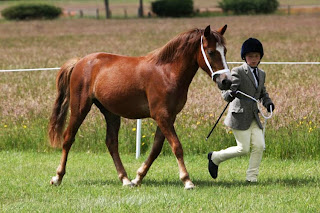 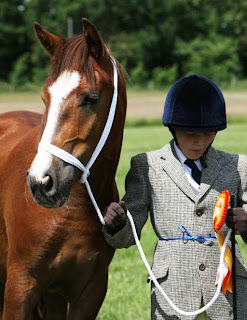 Photo by Ella Porter Photography
It's been just over six months since Cello went to his new home with Stevie, so it was great to catch up with how he has been getting on. He went to his first show last weekend and, as well as loading and travelling well, he was really well behaved at the show itself.
This is what Ella told me:
"Here are the pictures of Cello and Stevie at their first show. Cello was an absolute star, putting a lot of the older horses to shame!!! He dealt with the showjumping warm up ring next to where he had to stand, didn’t even blink at his friend Poppy trotting off in front of him for the judges first, and even when someone let their horse go twice and it charged right past him he didn’t flinch!!! He was 5th in Best Condition but should have done better in the other 2 as well, but the judge said ‘I don’t like foresters!’ so we weren’t holding our breath! It was about the experience for little Cello and if he had arrived and been at all fazed he wouldn’t have gone in any classes. He did enjoy the event being on grass also!!! We had been practicing loading him in the lorry for the past few weeks and really paid off, they both travelled really quietly and he was completely chilled out when he arrived. He was also a star for his first bath the day before!
He looks like he has a little bit more growing to do but is around 12.3hh-13hh at the moment. The difference in Stevie since he’s had Cello is incredible. If he has a bad day, Wendy sends him out in the field with Cello to have a chat and within minutes he’s calm again. The other day Stevie finally believed Cello loved him when he came galloping over flat out when he saw Stevie at the gate, they’re like 2 peas in a pod!"
Have to confess I am sitting here with a tear in my eye. I knew this was a good decision and only hope I can find equally nice homes for any foals I have in the future. I took to Stevie the moment I met him.
Posted by Loisaba Wildlife Conservancy at 8:16 PM