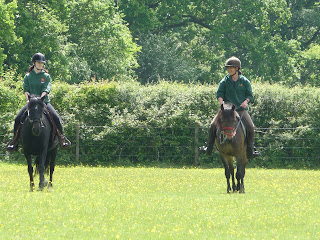 Last night it was off to the Kelly Demo at Sparsholt where there was a new performance measurement of the number of RA's per square inch! It was good to see....Kelly, Rosie, Zoe, Lynn, Cyndie, Linda, Sue, Sheila and Joanna all in the same place as well as lots of people I know originally as clients and now as friends. We were more than equally matched by the number of firemen as Anton Phillips brought along about 20 members of the Animal Rescue Team.

It was a slightly groggy pair that worked with Ludo and Flicka today. Jenny and Flicka did more work accompanied by Petra who was being ridden by Amy today and later Ludo had his first ride out in the Forest which also included his first trot.

My first attempts to try hide and seek with Jack were a dismal failure. Despite watching me go round the corner while he was munching his pony nut jackpot, Jack shot past the turning when he cantered up and I had to go out and say coo-ey! to him. Serve me right if he had then hidden himself and gone boo! Try again another day.
Posted by Loisaba Wildlife Conservancy at 7:04 PM