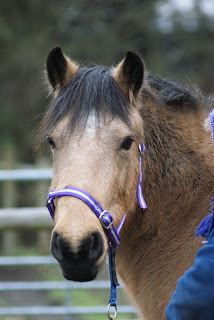 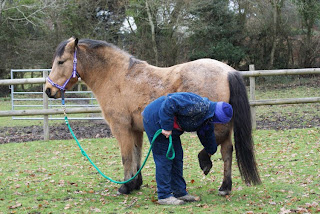 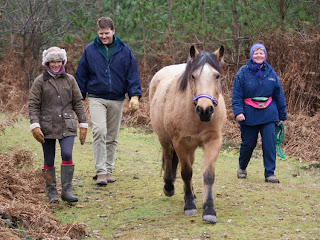 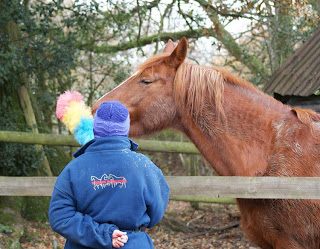 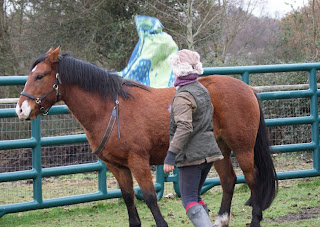 David went to the Formula One Grand Prix in Abu Dhabi and to see Prince in concert for his Christmas present so I didn't feel it was too much to ask for another man for mine although I did have to share him with Jenny. We had Ben Hart all to ourselves for the day and it was brilliant to be able to ask anything we wanted and to check out how our training is going with Jack and Splash. Despite having to get up at 5 a.m. to get to us, we tried to ensure that Ben had a good day too as we did go out walking with Jack and to the pub for lunch. Everything seems to be going in the right direction and we learned a load of new but small stuff too. The small stuff is so important. We both found that we have been over-rewarding out ponies for behaviour which is not the final behaviour that we are after and not being clear enough (not a huge sin in their eyes I am sure!). For example, I have been rewarding Jack for picking his foot up abruptly as a step towards picking it up softly - by waiting until he picks it up softly in the first place, all the stomping stopped. I could feel the cogs going around in his head. My aim is not just softly, but ONLY softly.
We also did some work with Theoden who can be aggressive around food. Last winter he was kept short of food by his owners and learned to mug those people whose houses bordered on to his field; it worked beautifully. It's safest at the moment to work with him behind a barrier in case he decides to 'cut out the middle man' and to go direct to the bumbag with his teeth. In this position I can actually let him investigate the bumbag and find out that touching it doesn't produce food. The aim of this session was to teach him patience, introducing a variable schedule of reinforcement. I had to get out of my habit of always counting to three and held my hand behind my back so that it didn't inadvertently go to the bag before I wanted to use it as a terminal signal. It worked really well and only once I am satisfied that it is safe to do so will I work with him outside the pen or loose.
Jenny was able to demonstrate just how far she had got with Splash (our mystery pony from a few months ago) and how Splash now accepts a saddle and other equipment without leaving. Ben felt that Splash was ready for Jenny to make deliberate mistakes in order to get Splash accustomed to things flapping, following or falling off her.
It was a very relaxing day and good to hear Ben's philosophy on all things training. The aim is not to click and treat every move the horse makes or to click and treat the same behaviours for ever. However, clicker makes a fantastic foundation for any horse and I think it's a good idea to have it in the horse's own manual as well as your own tool box.
Posted by Loisaba Wildlife Conservancy at 7:02 PM