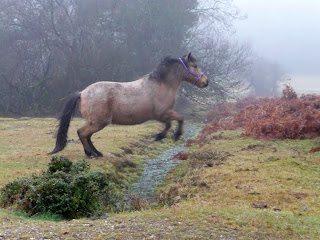 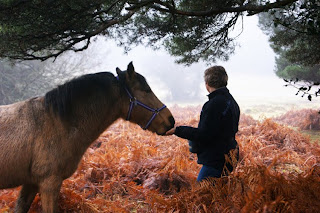 No New Year's resolutions but plenty of plans afoot for 2011. I have already started training for a sponsored walk/run that I want to complete with Jack in September 2011 for the IH charity of the year. The charity will be chosen at the IH garden party in July and is likely to be a welfare charity for horses. I plan to walk 10 miles a day for seven days across the New Forest and hope to be joined by friends and their horse on foot throughout. I have already been sponsored for the special fell running boots that I'll need and received offers of pony nuts, board and lodging for Jack as well as reiki and physio care for him. Please let me know if you would like to sponsor us.
Work-wise I will be carrying on as usual and hope to be busy. I should have the new dates for the Equine Awareness Courses very shortly and the Dartmoor Pony Training Centre Course for Wild Foal Handling is booked for 24th to 28th October 2011 inclusive and has one student enrolled already.
The Friends of the Hampshire Animal Rescue Team will also be fund raising this year and are keen to assist the Team in setting up a charity to support their work. Anyone who has an interest and expertise in setting up such a charity should contact me in the first instance - this should be a thoroughtly worthwhile and long term project for someone to get their teeth into.
The Listening Post gives me plenty to do on rainy days and in the evenings and we will be running a short article writing competition alongside a photography competition in the next edition. I need to get plenty of material in the files just in case I do go to Botswana to work for three weeks! If that particular plan doesn't come off then David is going to buy a convertible car and we'll be off to Scotland for a few weeks instead. I'll be offering to do RA work while I am there.
I am hoping to be mentally and physically a lot fitter by the end of the year! It should keep me going until next Christmas!
Posted by Loisaba Wildlife Conservancy at 6:36 AM