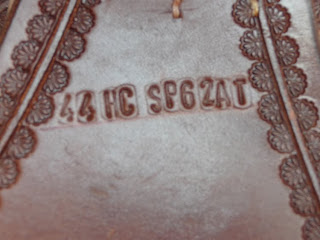 I have been pretty astonished at how few people want to take up the offer of free tack marking. I carry a set of Hampshire Horsewatch tack marking blocks which can be used to postcode (or NECD code) any tack, anywhere. Marking tack and even small items of horsey equipment makes it less likely that it will be stolen in the first place, more likely that it will be dumped if it is stolen and more likely that it will be recovered if the police come across a haul of stolen kit. It's evidential value is enormous. Each month I receive a report from Horsewatch about stolen items and there are always unmarked saddles and bridles in that collection. Thieves will climb through roofs and remove doors to get to tack and they will enter houses too. Tack often goes missing at shows when it is left casually propped up against the horsebox. I think we are very precious about our tack and don't want it defaced because it costs so much money. However, it is precisely this that makes it more attractive to a thief and marking it makes it far less easy for them to sell on.
Posted by Loisaba Wildlife Conservancy at 9:18 AM