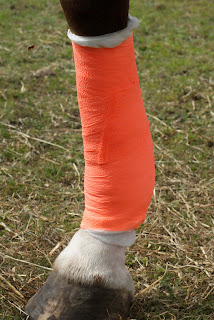 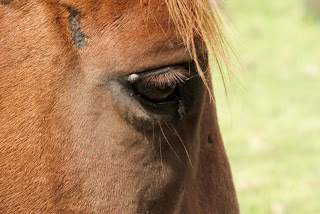 Poor Chancer has been in the wars. He managed to cut his leg on a metal hurdle when he was leaning over it to get to the six blades of grass that were on the other side and is now on antibiotics for five days. Fortunately nothing too deep but still nasty. While the vet was out I expressed my concern that he just doesn't seem to be thriving at the moment and we have agreed that he should have a gastroscope in the near future. Chancer hasn't been in race training for over five years but I understand that gastric ulcers do not always resolve themselves just because a horse is turned out full time and given plenty of fibre. Lindy is also a bit of an expert on nutrition and we are trying him on a higher protein diet with some added oil. Although he is a nice weight, Chancer's coat is just a lot duller than the others and he is very quiet. The vet also took blood samples to see whether he is deficient in anything. And finally...the vet is going to investigate whether the lump on Chancer's eyelid is a sarcoid as it does seem to be getting bigger very slowly. Photos will go off to Professor Derek Knottenbelt at Liverpool University to see which treatment he thinks would be best.