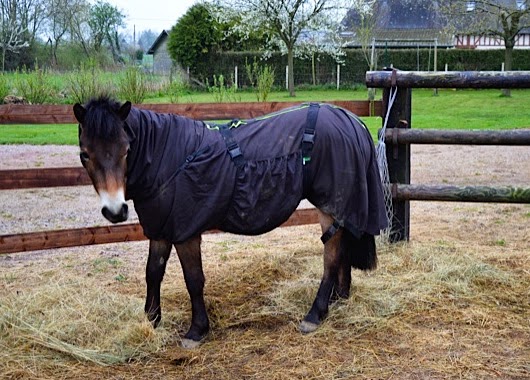 I've got over 500 photos to sort through from Mallorca so in the meantime here's one of Happy Heather in France in her new fashion house sweet itch rug. Horse couture. She should be so much more comfortable with this on. All Joyce's work on desensitising her back end to touch has certainly paid off.

A little news of Piglet who went home while I was away. Tracey supervised his leaving ceremony and was pleased to report that: "Just wanted to let you know today couldn't have gone better if I'd paid the horse God! I bought some tasty minty treats! It was pouring with rain! Put a head collar on and then we went over to the corridor, he was loose and walked in like I'd told him what to do. [With] the lorry right up to the gate and Piglet walked on loose. Danielle seemed really excited to be taking him home, and really pleased with him and said he's going home with a different attitude to life and she feels she can enjoy him."

Having got him home Danielle reported that: "I just wanted to let you know Piglet is home safe and now tucked up in bed. He came straight off the lorry first and stopped for his 3 clicks and carrot at the end and then followed Arthur into the field. He was happy to be home and had a few bucks and a run around. When I brought him in he came up with Arthur and then tried to come to the clicks although Arthur told him off for getting too close to me. However he came once Arthur was out of the way and although he was a little hesitant to go into the barn as it's new, he came to the clicks and walked in and straight into his stable. Then he was happy to come up to the clicks at his door for his headcollar off and several cuddles. He seems so much calmer and more confident and I'm excited to start work with him. As I said I will spend next week just asking him to approach for clicks and a treat and letting me approach him. I will keep you posted as to his progress. Thanks again for all your hard work with him."

I hope we will receive another instalment soon although Danielle did threaten to inundate me with photos just as I have her.