I was impressed last week by a letter which appeared on the Horse and Hound Magazine which was written by Kelly Marks. She referred to a recent feature stating that leadership and dominance shouldn't be used to train horses following a report by The International Society for Equitation Science.


She said that ISES "is likely to cause even more confusion among inexperienced and anxious horse owners, who are the only ones likely to take seriously a study that uses the words "dominance" and "leadership" interchangeably. I worked in a showjumping yard as a teenager where I witnesses extreme examples of human dominance - horses were laid down ton the ground and beaten. I only saw it produce petrified and ultimately dangerous horses. "Leadership" is a different concept altogether. Good leaders aren't bullies but are those who inspire confidence by being calm, consistent and give the appearance at least, that they know what they are doing. Then there are people who label a horse dominant because it walks all over them. It's far more likely the horse is actually anxious and will be helped to overcome this by clear boundaries and competent, consistent handling along with the odd well-timed reward for correct behaviour."

I agree wholeheartedly with Kelly on this. I have seen so many horses, and dogs incidentally, that are totally lost without any leadership. The horses express their anxiety by walking all over their handlers, dragging them here and there, and the dogs do the same. How many people do you see these days with their arms outstretched with a dog dragging them along? I won't let a horse do that and I wouldn't have a dog that did that either.

Leadership doesn't have to be fierce or mean, just there. I know that when I am in a group of humans, I like to have someone around who is the leader - if only to have a break from it myself!

It was good to see, on the same two pages, a letter all about inappropriate whip use by children.

"We can buy cute whips decorated with glitter and waving hands for children or diamanté ones for a more sophisticated chastisement. They don't cost much in the shop, but the psychological price for the pony is huge, if they are used wrongly." 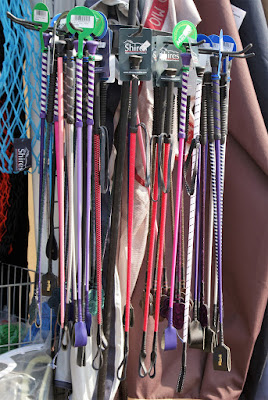