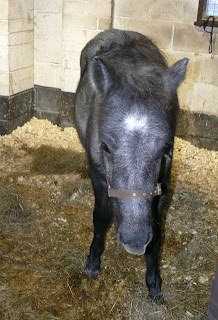 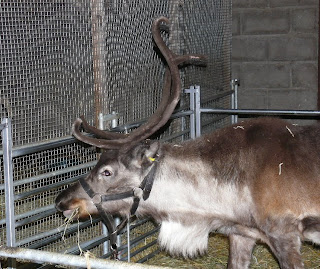 Today it was off to Oxfordshire to meet Anne and her new Dartmoor Hill pony and New Forest pony. These ponies have really landed on their feet and are now part of a menagerie which includes cats, dogs, pigs, goats, alapacas and reindeer. The reindeer above is called Stig but he tells me that he has never appeared on Top Gear.

E-mails received: Good grief Sarah - that was quick! You are so proffessional but so easy to be with - thankyou so much for everything you did - I am so grateful and so so lucky you could come today. I can't tell you how much better I feel about managing my ponies . I will go and read the report - I think it could be described as very comprehensive and substantial !!

What a difference a day makes!!! Had to tell you how today went. still felt some trepidation yesterday - hoping I could carry out the training you gave me. Went into the stable this morning, put the leadrope on and took Henry out and practiced everything you showed me and it worked! He went along with everything I did and I felt so pleased! He and Merlin had their feet done by the farrier and although I thought they were fidgety the farrier said they were good. Thank you so much Sarah I feel so much better and so much more confident, it's incredible. AW 13.11.08
Posted by Loisaba Wildlife Conservancy at 8:18 PM