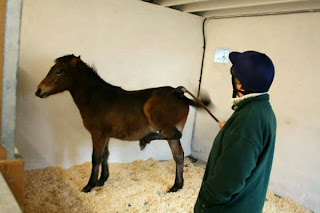 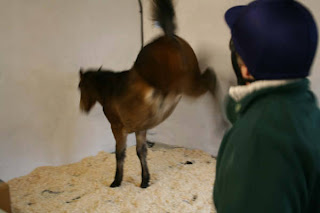 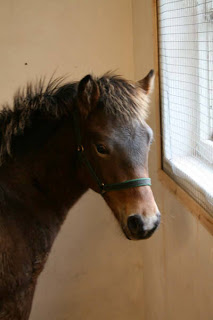 Towards the end of this week, I went back to do some further work with Rowan, the most shy of the three foals that we handled at the course. Magnum and Dunnock came round so easily in comparison it's hard to know whether it is nature or nurture that determines how readily they can be trained. This time I worked with Rowan using a ribbon which can be draped over his back and neck before gently going around his nose. Of course it cannot be used to restrain him and in a way that is the most important message - I don't intend to force you to stay with me by holding on to this thing around your face. Having accepted the ribbon he found it much easier to accept the headcollar.
E-mail from Aud 29.11.08 I brought them in at 2.45, split them up as usual and set to work with Rowan. I fiddled about for a bit to help him to relax, he was very wet again, so a bit of time with the towel, and then I played with the bit of ribbon. He progressed very rapidly to the ribbon halter and lots of face scratches. I then started with the open halter up the neck with lots of face scratches. I did 10 repeats, and then I decided to see how he felt about the headcollar going straight up his face closed. I worked on standing at his right and getting him to have semi cuddles as part of his reward. He now likes to lean heavily into my side with my arm over the top of his neck scratching the opposite side of his face. He likes kisses on his face and at the base of both ears (possible due to my height). Once he really got into that and was so relaxed that I was having to lean forward to reach him, I then was able to take the head part over his neck, pass myself the buckle underneath his chin and then put my arm clean round the front of his face, partially obliterating his left eye and knocking into his left ear whilst I fumbled to do the buckle up. Big click treats throughout. I then let him have a breather prior to taking it off, click treat, then start all over again. I managed 17 repeats, was watched by Sian for 3 repeats, and then I did 3 repeats each with Magnum and Dunnock and put them all out again.
Sian was really amazed at the progress that they had all made. She hasn’t seen them for a week, but she thought that the change in Rowan was truly astounding!
Thank you so much Sarah.
E-mail received 3.12.08....Just to let you know that the 3 boys met the farrier today.
He is Guy Reynolds, Amy - the vet at the Barn’s - OH. He was so sweet with them.
Magnum and Dunnock met him in the yard in a most business like fashion.
Halter and leadrope on, big strokes, sniffs of farrier apron, legs stroked, front and back legs picked up. He then tapped their hoof with the trimming tool, and Dunnock even allowed him to pick his foot out with it. Good boy! We went into the stable to meet Rowan, he required a little bit of click/treat, but no biggy.He had a leadline on for the first time. Guy just stroked him all over, let him sniff him and his apron and ran his hands halfway down his legs.We left it at that as he had been a good boy and we did not want to fluster him. A very successful visit overall. He was actually here to do the minis.
Speak soon.
Regards from Aud.
A good advert for Guy too I think.
Posted by Loisaba Wildlife Conservancy at 4:32 PM