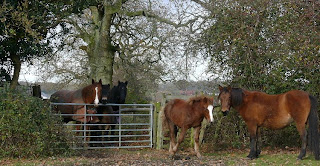 Nelly is quite clearly pregnant again so she has been in for a few weeks to make sure that she can still feed Cello and the invisible one. I had hoped to put Cello in with Chancer while he was weaned but unfortunately Chancer gets more upset about Nell leaving than Cello does and gallops up and down the fence bucking as high as he possibly can. For now I have left Cello with Nelly and turned them out for a while. The plan is to get them hooked up again with Blue so that Blue can keep Cello company when he is weaned instead. Musical ponies!!

Incidentally, I have decided to keep both Blue and Nell in next year when the stallions are out so that neither of them get pregnant. It just seems risky breeding foals with the current economic climate and too many horses are ending up at rescue centres and the abbatoir. In the meantime, Cello is staying put until I can find him a really good home.
Posted by Loisaba Wildlife Conservancy at 7:31 PM