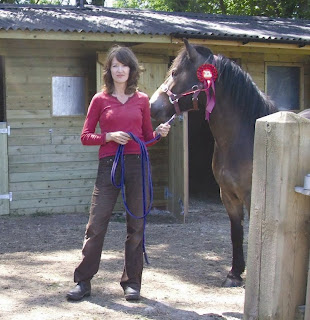 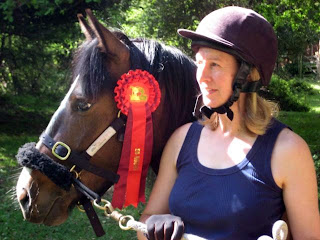 Both Carol and Frances have completed 50 hours groundwork with their ponies, in Carol's case with all three of her Exmoors. Pete, below, is coming in for starting next week so all that preparation should stand him in good stead. The rosette scheme has proved to be a good incentive for some people but does not cover grooming and poo-picking!! I can be contacted for details.
Jack definitely deserves a rosette of some sort. Yesterday he stood for ages, loose, while I groomed him all over including his legs without any clickered treats at all. His nemesis is his pectoral muscles, which he loves having massaged. He stood with his neck arched, his top lip stuck out and rocked from side to side while I did this. It seems that I only have to click him through the early stages of anything new and then he is cool about it. This is incremental training at it's best - it's not so much a ladder to step up, but a cobweb with learning in every direction at the same time. I am hard pressed to keep up with him but also think there is great value in consolidation. Considering it has only been four weeks since he came in and yesterday was effectively his graduation day, he has done fantastically and I am so pleased that he is going to stay.
Three things have been bothering me recently. First of all the lack of "breaking yards" where people can send their horse in the certain knowledge that the horse will not be hit. I know of no yards where this is definite policy other than the other Recommended Associates on the list and I would be really pleased to receive details of any yard that promises this. People are loathe to send their horses far away and yet they know that they are having to turn a blind eye to the fact that their horse will be hit as a first response for anything that it does "wrong". Just because the owner isn't doing the hitting, doesn't mean that they aren't responsible for the horse being hit.
Next, is the negative atmosphere in so many livery yards particularly when it comes from the yard owner. I go to many clients whose confidence is severly affected by this and the sheer quantity of unsolicited advice that they receive much of which seems to be aimed at forcing horses to do things. As Caroline said on the IHDG, its tempting to say, yes, I know it will only take a minute to make my horse do such and such but it will take a year to undo what you've done. Individual practitioners of IH have to think of themselves as pioneers and take some comfort in the fact that the movement for non-violent horsemanship is growing.
And three....it's gone. Well that's got to be good. Off to work now.
Posted by Loisaba Wildlife Conservancy at 7:44 AM