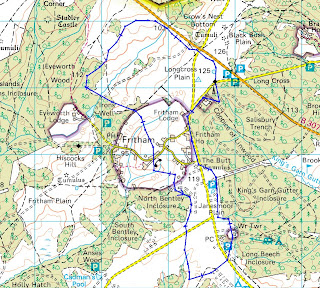 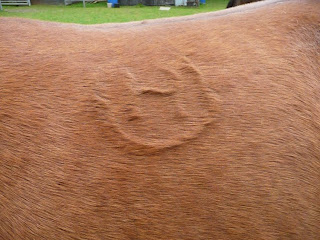 This is Nelly's usual haunt - a radius of no more than two miles at any point. However if she has gone into any of the inclosures there are plenty of places where she would be hidden. She does come to call and is friendly. The bottom picture shows the bigger one of her two brands (she was originally a Hankinsons' pony). I shall do my best to find her and hope that she finds me first. I've lost count of the number of light bay with dark bay ponies that I have checked out in the last few days. Much as I hate having to have my ponies branded, when they live in mixed herds like this on an area of over 140,000 acres, they could be anywhere and I will need to describe her to people who may be able to help me. Her passport says that she has brown eyes and a whorl mid forehead with white hairs on her muzzle. She has a mealy nose with black nostrils and lips and, save for a few white hairs in her tail, she has no other white markings at all. Fancy trying to find her on that alone? Of course if she was microchipped we could eventually have every plain bay pony that turned up on a drift checked with a reader - so that would be August then (although I'm not sure the agisters actually do have a microchip reader). Branding IS necessary for the welfare of the New Forest pony until someone comes up with a microchip that can be read from a good distance or some sort of tracking device.
Posted by Loisaba Wildlife Conservancy at 9:30 PM