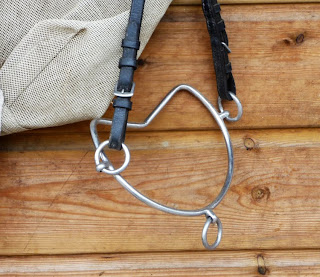 It's worth thinking about how many 'musts' and 'makes' you have in your mind or even out loud with your horses. I have one must which is "You must try" but I try to keep it at that. I have a few 'must nots' which include must not bite, barge or overtake. When painful devices such as chifneys, twitches and the whip are used to tell a horse he must or to make him do something, they ultimately lead to a break down in trust which comes to the fore at some stage if not immediately. The horse knows that at a push, and maybe not even a very big one, he'll be forced to accept something and this may be being done in the name of competition or cosmetics; things that he couldn't actually care less about.

The chifney was invented by a jockey called Samuel Chifney as an anti-rear bit. "If one wished to encourage rearing", says Elwyn Hartley Edwards, "this is the bit for the job". They are also known as 'the jaw breaker'. Despite their soporific effect once applied, twitches cause immense pain in order to release the endorphins that sedate the horse and yet some yards seem to apply them as a matter of routine. The horse then becomes frightened about what happens before what happens happens. In a genuine emergency situation, these devices are no doubt useful - at the scene of an accident where the horse has absolutely got to be restrained or a life-saving journey to the vets but not for everyday leading, loading or clipping. It goes back to train now for what you don't need. So, for example, at this time of year you might want to train your horse to wear a rug if he hasn't done so before or to have his legs washed in case he gets mud fever in the winter. It's always a good idea to practice your loading, foot handling and needle-less syringes as you never know when you are going to need to travel somewhere urgently or have an emergency farrier or vet visit.
Posted by Loisaba Wildlife Conservancy at 7:56 AM