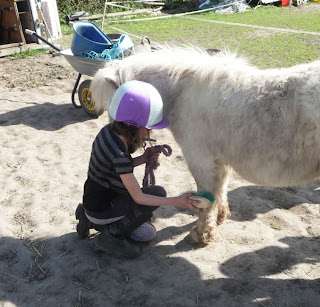 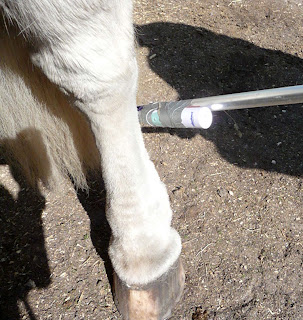 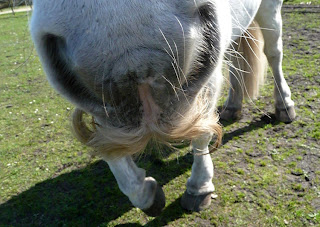 As well as giving one of my clients a lesson in sheath cleaning, I was asked this week to help with a pony that hates having his legs brushed and a horse who objects to having his legs clipped. With Fudge (top picture) it was a case of analysing what he could cope with and then taking the brush away to say thank you for standing still. In that way we taught him that he could trust us to take away the thing he finds irritating if he puts up with it for a little while. At the end of the sessions we had got up to five In various languages) brush strokes before taking the brush away. He had started to take his attention away from the brush and to relax. In time it should be possible to build up to more brush strokes at a time especially if the children who brush him pay close attention to the way in which they brush him.

The clipping horse has suffered from mites (and now has regular injections along with pig oil and sulpher coated on his legs) and has been sedated to have his legs clipped out. Today we made a good start with clicker enhanced training and progressed from touching with an electric toothbrush to clipping his legs in very short strokes. Amazing moustache don't you agree?
Posted by Loisaba Wildlife Conservancy at 8:54 PM