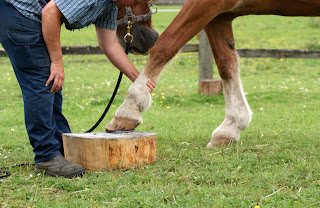 I met a horse yesterday that because he is in pain is being difficult about lifting his feet up for the farrier. Whilst the owner is busy seeking medical advice from the vet and the farrier amongst others, we have to find a way to reach a compromise with the horse so that he can have his feet cared for. We worked on timed lifts so that he is given a break after every minute of holding his foot up - hopefully the farrier will agree to go with the same format and, providing it is a safe moment to do so, put his foot down after say two minutes each time. In that way I am hoping that the horse will realise that the discomfort is finite and work with us. At the moment there is no way that he can lift up his feet up to put them on a tripod so I aslo started to clicker train him to place his foot on top of a log (which will now be covered in rubber matting to make it non-slip). Instead of politely but persistently moving his feet away, he began to approach the log in the hope that I would be picking them up again.