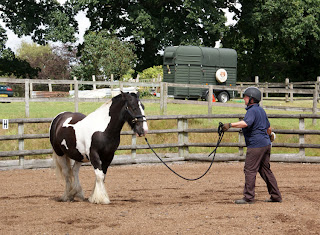 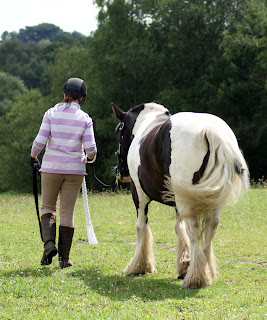 This is Rome who has an interesting habit of pressing into people quite strongly when he is cross. This into-pressure response is automatic and instinctive in horses, especially colts, and is then doubly reinforced if it works in getting rid of a threat or an irritation. As far as he is concerned that is job done. Yesterday we started to analyse what it is that sets it off - I suspect that it is any pressure on the poll (hard to avoid when he also has a tendency to plant) - and I have suggested that he has his poll checked the next time Kate Boe is out to look at him. It's hard to guess at his history but if he has ever been owned by gypsies he could have been tied to something solid to teach him to 'respect' the halter or indeed tethered. We also needed a strategy for breaking the pattern. Needless to say, hitting him is not an option as that would then turn it into a full blown war and in my view justify his behavour. Instead we worked with the bright white wip-wop rope to establish some distance when he started to invade our space with any sort of intent. Once again, no problem with you expressing your dissatisfaction with life but please, take it over there! The other aspect of his training was to make sure that it was utterly fair - understandable, calm, consistent and that he was rewarded with a lovely touch every time he got it right. Like many cobs, he proved to be very light and intelligent which reminds me, I must get a copy of 'Cobs Can'.

Email from SB 8.8: "...today after reading through your report and looking at the photos a few times, I felt so much more confident around him. I used his normal head collar but with a rope around his nose and added an extra rope on the end for length. Not ideal but it'll do for now. Coming out of the field and going up the hill was such an improvement! 10 times over! There was probably only two moments when he thought about moving into my space, so I did the chicken thing and he backed off so I stopped him and made him step back a little. Before continuing. On the way back down the field he was a little naughtier than on the way up, and we had one spinning around me type incident, but it was pretty much over as soon as it had started."
Posted by Loisaba Wildlife Conservancy at 8:34 AM