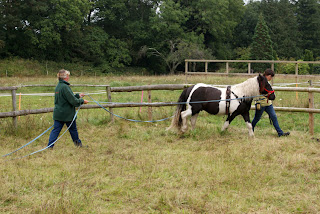 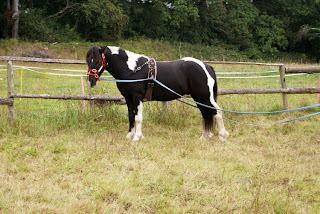 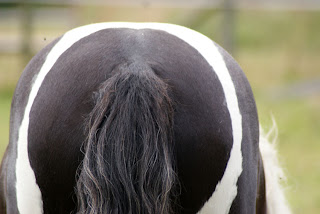 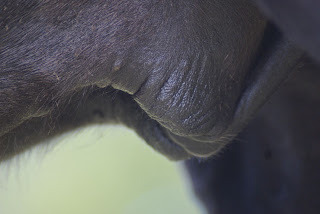 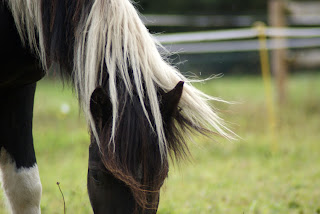 Last weekend I went out to two new clients (no photos as yet). The first has a horse that has become terrified of high vehicles and the second that has an interesting habit of moving people around with his jaw bone - ouch. I look forward to being able to tell you more.

On Monday I went up to see Theoden and was reassured to hear that he hasn't bucked at all since my last visit and is starting to look very soft physically and mentally when worked.

For the last two days I have been revisiting Magic and Merlin who have turned into fine young men; such a long way from the frightened youngsters I met early last year. They are both ready to long rein now. Magic, the younger one, took to it easily whereas Merlin, who probably experienced an extra year's worth of manhandling or was a year older when he met it, is more suspicious of human approach. Accordingly it was essential that we made real friends with his back end so that he would be more relaxed about the long reins. We spent lots of time 'seducing' him by massaging his gluteal muscles and scratching his dock (all done in the best possible taste) so that he was less worried about being touched. Sadly, there is a secondary purpose to all of this now as I suspected that the 'grape' like growth on his sheath was a sarcoid. We walked him up the lane to the local vets to have this confirmed and then spent time desensitising him to being handled and having body temperature cream applied so that he will tolerate the 'Liverpool Cream' that may well be recommended by Prof. Derek Knottenbelt when the photos are sent off.