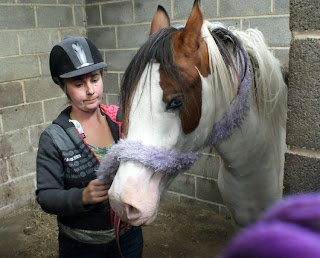 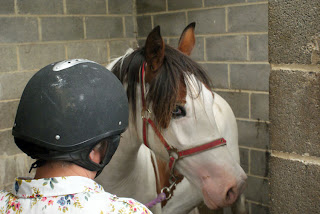 Earned my lunch yesterday by helping a friend with her pony who has suddenly gone on strike about having his head collar on. This is a pony that so far has taken everything in his stride from picking up his feet to long reining. He's happy to have people around him even when he is lying down in the field. So the issue could be teeth or early sunburn (he wears a fly mask and nose net in the field) or he could have got caught up; an outsider might have had a go at him. In the end, the reason doesn't help with the solution in this case other than preventing the sunburn and having his teeth checked. The human emotions connected with this apparent 'failure' and 'rejection' don't help at all and need to be left at the gate along with any sense of cross-ness or frustration or indeed entitlement. You have just got what you have got and need to work on that little thing. It was clear that it was the right side of his head that was bothering him the most so I set about seducing that with the fluffy scarf and then started to work with the head collar itself. By undoing the nose-band for now and using a lace to just draw it over his face, I was able to work without crowding him or presenting him with extra things like hands so that it took less than 4 minutes to put the headcollar on rather than the 40 that it had taken the day before. Repetition, repetition and repetition will now be the answer.

Posted by Loisaba Wildlife Conservancy at 9:28 AM