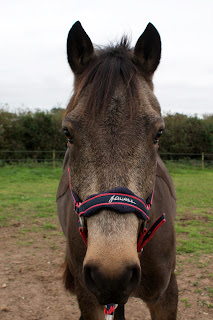 Probably not the best angle to take a picture of one of the most beautiful horses I have seen. This is Carter the Connemara and he really is a delicious creature. Trouble is he knows it and thinks that some things may be out to eat him. Today we did some very simple groundwork and made a start on desensitisation with a shoot going on in one field and a dressage compeititon in another. It will be good to allay some of his fears and turn him into a mini police horse.

Where a horse has a habit of shooting forward when he is worried  it is worth giving up carrying a whip at all even if it is only ever used as an extension of the hand or at a distance when lunging. The problem for these horses may be that they have met a whip used for a very different purpose and they find it very hard to forgive and forget. Many horses are hit for being frightened for example and then they are not just afraid, they are afraid of being afraid. I haven't carried a whip for well over ten years now and have never missed it. I understand the argument about the whip being an extension of the hand but, if that is the case, why are we using something that is thin and sharp and invisible to the horse, rather than something that is clearly visible and hand-like - surely not just because of the weight of it? When a horse has met a whip in punishing circumstances, it will always be a strong aversive in his mind. This is why I don't accept the argument from jockeys that the racing whip doesn't hurt - it might not (although I doubt that too) but the ones used at home in training certainly do.
Posted by Loisaba Wildlife Conservancy at 6:50 PM