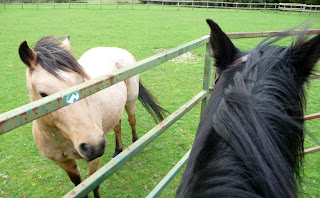 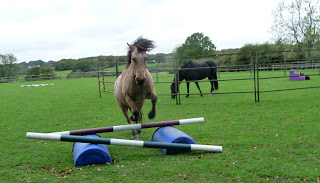 I've had this mad idea that I would like to be able to take Jack out loose with Petra, at least in the enclosure to begin with. It requires a bit of co-ordination to cue one, cue the other, click one, click the other and then give them separate treats - never mind trying to take photos from on board!. Petra is asked to halt with the words "and whoa..." well actually "an...." and Jack is asked to come up to the word "Jack!" (very original I know and it does make us sound like an episode of The House of Elliott). The click is the same for both of them. Petra gets her treat to the opposite side that Jack is standing to avoid them going for the food together and Jack is given the treat in the 3 o'clock or 9 o'clock position to save him annoying Petra. We've made a good start with me riding Petra inside the round pen and Jack circling the outside of it so that they establish some rules of engagement before they begin and are both given the opportunity to get used to the idea without coming in to really close contact. Afterwards Petra relaxed in the round pen and Jack prepared for the riderless Olympics.

Update (7th October): Yesterday I worked with Jack and Petra in the small paddock together. Apart from making gruesome faces at Jack, Petra was great and Jack was suitably careful around her. If he was too frightened of her it wouldn't work because it would set up a conflict with the clickered treats and, if he was too confident, it wouldn't work because she would definitely kick him or bite him. As it is, we are all trying to be polite and tactful. Today we progressed to the top field where we did some trotting! At last, a way of giving Jack some real exercise. I could, of course, have him on a lead rein however if I dropped it or he pulled loose for any reason he would panic about being 'chased' by the lead rein - as it is I am hoping be able to use a lead rein with an easy break away for the open forest knowing that if he does get loose he would want to come back to me. In the inclosures he can go free. We've even met other ponies in the inclosures when we've been out for a walk before. Jack goes up to say, "What's your name? Where you from?", but then canters back to me.
Posted by Loisaba Wildlife Conservancy at 10:34 PM